It is so soft.  And knit up so very well.  My kitchener stitching needs work but you can't really tell.  The only thing I'd change if I had to do it again - just wear it as is and don't block it.  The blocking/steaming took away a bit from the scrunched look I had set out to get.  Lesson learned. 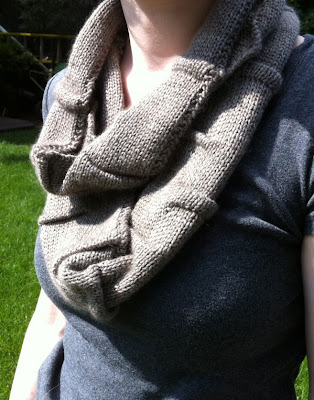 I've had the cowl blocked for days but only today did I finally have a) good (enough) lighting, b) time during the day and c) someone else around to take a photo.

It's funny how you get used to taking photos of all sorts of things but the second you need one of yourself, you find it awkward.  I'm often at the mercy of oddly lit mirror shots or the photography of someone whose style isn't the same as mine.  Luckily, and not surprisingly, my mum takes a decent shot.  The cowl is finished and I tried not to sweat it up while modelling (WARM outside today, she said while flushed and dying for a mint julep or something else associated with heat and humidity.)  I also had to avoid getting it drooled up.  No, it's not that I adore the yarn so much, though I do, but I had just asked for assistance when my visiting nephew woke from his micro-nap and desperately demanded auntie-snuggles.  Who am I to deny my favourite nephew/godson/person under 6mos of age?  But he does have a current habit of grabbing blankets, stuffies and his shirts and "tasting" them....

Have a wonderful holiday weekend!
Posted by CitricSugar at 8:51 PM