Ha! We all knew that "three posts a week" thing wasn't going to hold up for long. :-)

In all fairness, I had other things taking up my time.  Like teaching, and spring, and play rehearsals, and vehicular accidents (no injuries!), and general life stuff.  Priorities.  We all have them, so no apologies, no obligations.  However, other than keeping up with the hockey news, I haven't been reading anyone this past week.  So you know what I'm doing tomorrow. :-)

I have been sewing, amazingly enough.  A paper-piecing workshop at last month's Modern Guild meeting led to a scrap-busting explosion of hexagons in my living room. This is what 400 of them looks like.

Yeah.  Since I ran out of my purchased hex papers about a week into this, I ended up making a crap-ton (yes, a crap-ton!) of my own.  You can read more about how on the guild blog here.

I still have some edges to fill in and a border to do but I'm pleased so far.  It's going to be a table topper.  You'd think after all of this hand-sewing, I would have mad skills when it comes to the whipstitch. I should have a wicked whipstitch. But nay, good folks, nay.  It still looks a little like I did it with a chicken bone for a needle and with my eyes closed.  Oh well, maybe some day...

I was working on this piece at my other guild meeting (there are two different guilds in town - I belong to both) and a fellow member, whom I'd never met, snarked me, "Well, that's just compulsive!"  Fair enough - there is a nugget of truth in that, my mother would certainly agree with her, but handwork helps me focus and keeps my hands busy during stretches of time where my attention would otherwise wander, like the occasional guild meeting, and I'm therefore less likely to run around like a four-year-old dragged to a tupperware party for lack of a babysitter. To my credit, I did not snark back, because I don't know her and wouldn't want to inadvertently offend her while trying to crack a joke to prove I have a sense of humour. (However, blogging about it might have devalued that credit somewhat... Oops!) I couldn't help but feel though, while not offended, that there was a different way to offer that opinion that didn't make it a personal attack.  "I personally don't have the patience for something like that" or "I can't be bothered to do hand-sewing or something that small" or even "that kind of thing is not for me" would all have come across as more supportive or polite than the undertone of "there's something wrong with you!" implied with the word compulsive.

I had a pretty good laugh about it.  I'm fairly sure she didn't mean any harm. I'm not generally bothered by criticism. In fact, I think constructive criticism is key to growth and development, and our tendency to over-nice each other, particularly in the quilting community, detracts from our ability to deliver or accept such criticism without taking something personally.  What made me laugh was that the comment wasn't even about the work (too  many colours, poor whipstitching, inaccurately cut or sewn hexagons, or not to someone's personal taste), but that the statement was a value judgment on ME, and not the work. Now, I get called crazy all the time, (there probably IS something wrong with me - lol) but usually by people whose first names I know, and who I have an established rapport with.  I have called fellow bloggers crazy in a loving way, particularly when they are exceedingly prolific or unjustly hard on their own work. I guess I've become more aware as a teacher that what we put out there can have a impact on people.  Imagine if I'd told another artist, a potter, that pottery was a useless art, or a child whose room is covered in pink, purple and sparkles that only losers like unicorns (or apply it to weightier subjects that I won't get into here). It might roll off them like nothing, or it could stop them from enjoying something that had previously.  For the record, I think pottery is amazing and the skill level some people have achieved is staggering. I also have no problem with unicorns, though I don't embrace them as strongly as would your average person on the street.  And I LOVE constructive criticism. It helps me get better at the things I do.  I could not survive as a teacher without giving and getting constructive feedback. But this has been a reminder for me not be conscious of applying value judgments in that criticism.

I guess you can say I DID learn something from the comment after all.

I've got other things I've been working on but that's what's tickling my mind today.  Hope you didn't mind the musing.  Maybe it gave you something to chew on.

Have a wonderful Wednesday!
Posted by CitricSugar at 1:06 PM 21 comments:

Yes, I know the proper form of inventory in this case is actually inventory and that there is no such word as inventory-ing but it amuses me. :-)

I have been wanting for  a while now to have a serious look at my stash. A number of people I read  keep a log of how much comes in and goes out - which is something I wanted to try. One of my goals this year is to use more than I buy and to whittle down my scraps.  So I hauled out my stash, every piece of it, and sorted, assessed, measured and organized.  I had estimated that everything, fat quarters and larger, would be about 100 yards.  I was wrong...  It was more but still quite reasonable, though given the limited storage space and budget I have, I wouldn't want it to grow much larger.

I pulled all my solids since I'm in the Simply Solids Bee and wanted to have an idea of exactly what I had and where my colour holes were... Turns out I had no pink.  Seriously? So I added some. 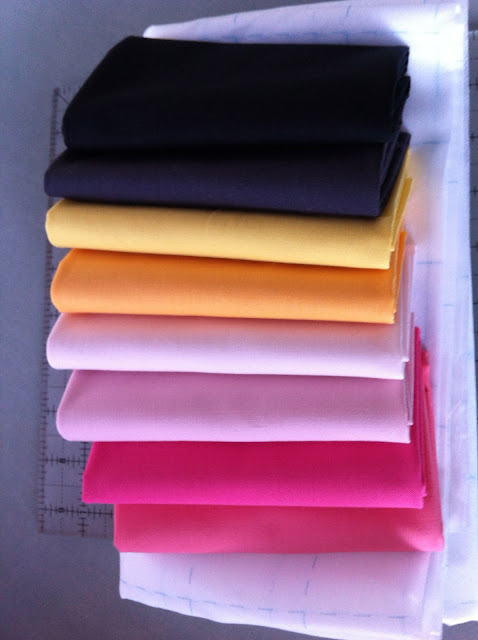 They're now in a box, sort of file-like, with my charm packs and a single junior jelly roll. 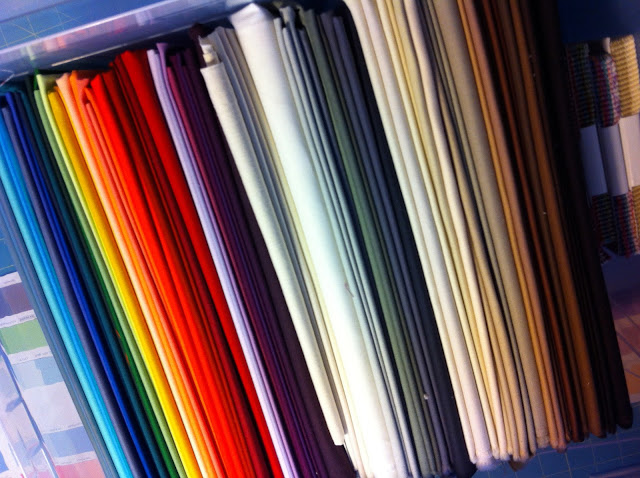 The rest of my stash I separated into colour. Ish.  I kept all my Lizzy House Peeps and Outfoxed together.  I still haven't decided what I'm going to do with it all but I'm also not ready to cut it.  It's a tricky bunch.  I also kept novelty prints in their own pile; I broke those down by type instead of colour. Here are my three piles: 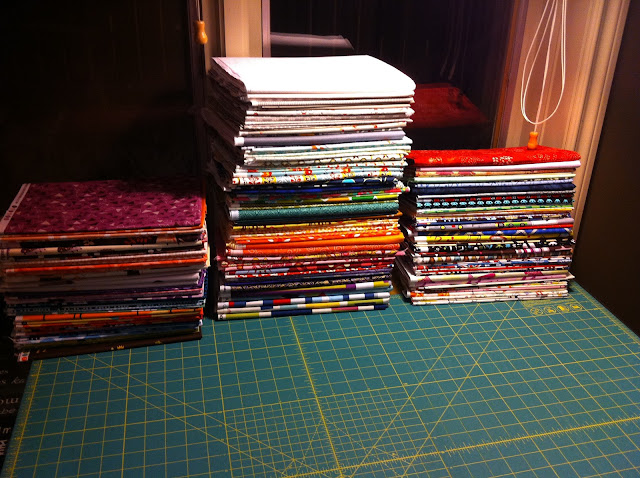 They are all now neatly tucked back onto my shelf and I have a much more clear idea of what I have and how much of it.  Yay!!

As for scraps, while they are loosely organized, from less than an FQ to crumbs,  I still have some major work to do and I wonder how I'm going to track usage of them since they're, well, not worth measuring in any conventional way.  (I'm not calculating the surface area of each little crumb - are you kidding me? I'm not THAT crazy.)  So far, I think I might turn to weight.  I can whittle them down by pounds...  Can you imagine?  "Hey, gals! I dropped five lbs!" or "I couldn't stop chewing on my stash and I gained eight pounds!!" Heehee.

And I made another Guild Bag, using the tutorial I wrote last week. :-)  Addictive!

I finished this one last week, a matter of hours before our guild meeting.
Since I was using only scraps for the top, I made sure it would have at least a little continuity and arranged all my block strip so that they progressed from dark to light with a grey, black or navy fabric running down the centre diagonal. They were looking pretty ghastly individually but once I laid them out, they took a different look through the camera lens. I didn't know ahead of time if it would be pretty or horrid so I determined ahead of time, whatever the outcome, it was going to be a blanket for cuddling up at night in the gazebo this summer.  This might have been a mistake to make that decision too early as I got pretty careless with the quilting and binding as a result.... lol.

I arranged them light corners to light corners, dark to dark, which gave me this rising/sinking effect.
To emphasize the light and dark effect, I quilted it with lines running through each dark diagonal all through the quilt and then concentric squares through the rest.  Since there's no batting inside, I wanted to be sure I had quilting through each and every square, though it doesn't really show up.   I decided against batting* (which made it much trickier to baste and quilt - slippy!) as I didn't want it to be too heavy for a summer blanket but I did want it to have some coziness to it, so it's backed in a Caravan flannel, which is the only thing I purchased for this quilt. It's bound entirely in leftover binding, which feels pretty good, too!
________

I was lucky enough to get a copy of Modern Quilts from the Blogging Universe from Audrie at Blue is Bleu. You should read her, if you don't already. Definitely a kindred spirit. 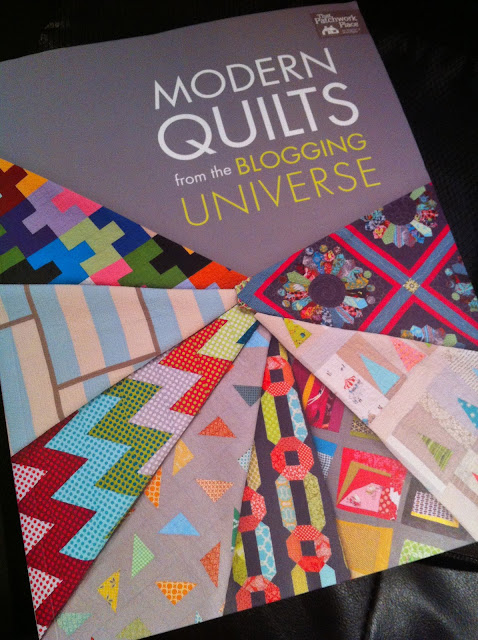 The book is great, and full of people that already populate my RSS reader so it made it that much cooler.... Thanks, Audrie!  I owe you one. And by one, I mean a few. :-)

*Dana at Old Red Barn made some 'outside' quilts last year without batting and I loved that idea...  You should also read Dana's blog. Also a kindred spirit.
Posted by CitricSugar at 8:27 PM 24 comments: