Hello!  If you're popping by from the Blogger's Quilt Festival, welcome!  If you're a regular visitor, you have seen this one before...

This year, I participated in my first online bee, called Simply Solids.  The rules were simple, too - only solids allowed! 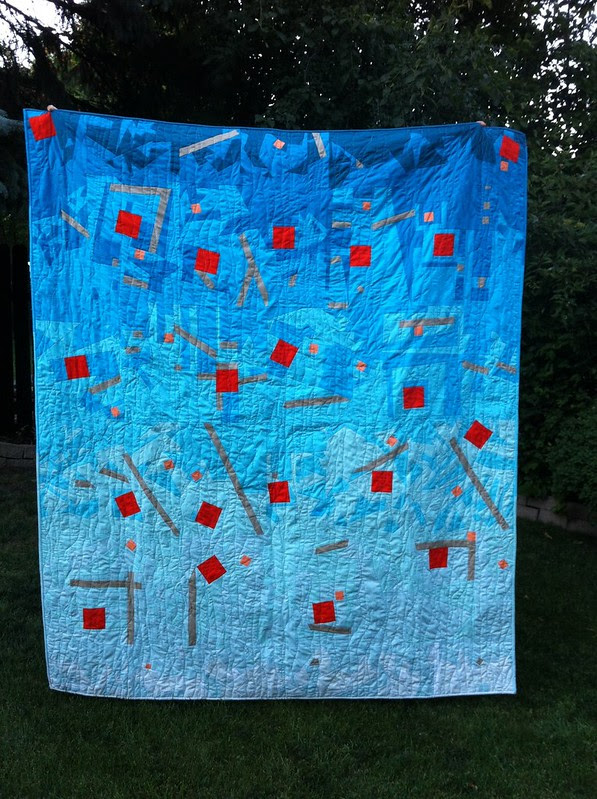 My month was June I stretched my brain for a while and was struck by the idea of a waterfall. To give it some visual oomph, I also decided flowers should be headed over the falls as well. 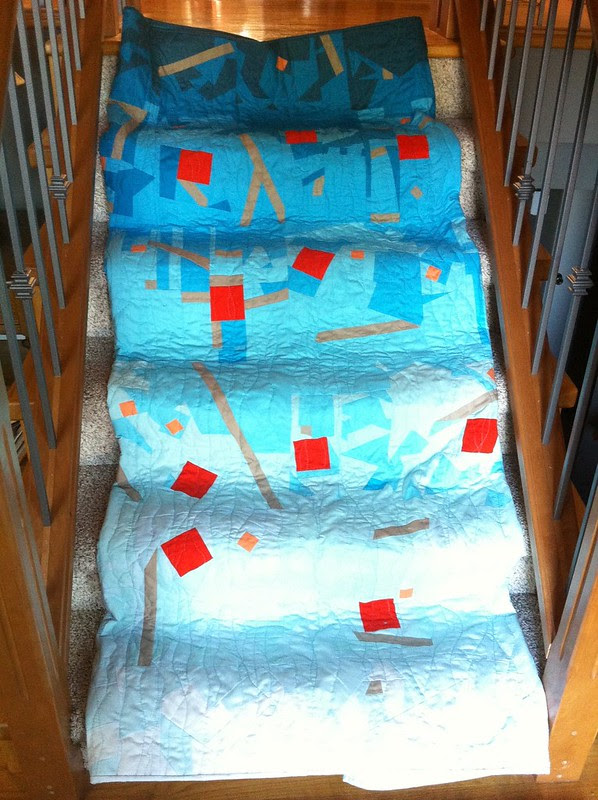 I sent my bee mates two different blues, two orange squares, and a strip of stone, asking them to make an abstract improv block - free-style, 12.5"x16.5".  And did they deliver!! 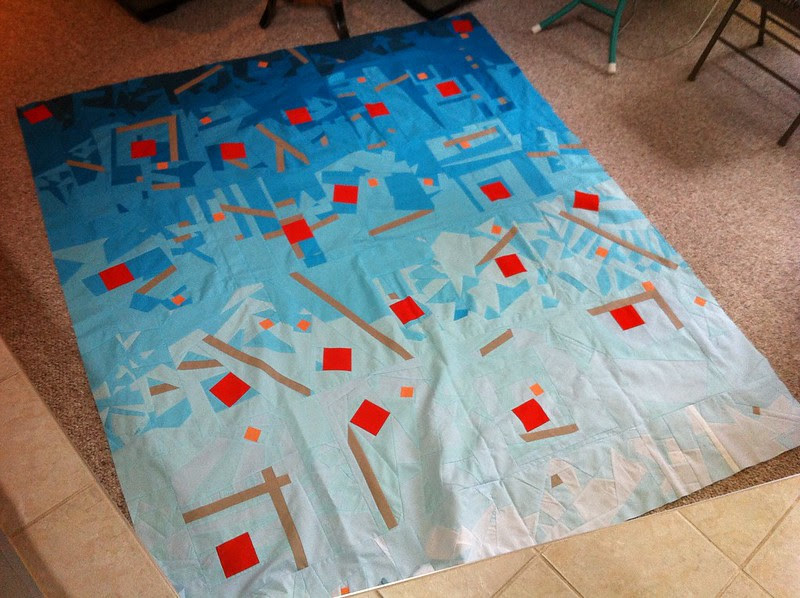 I added an irregular sashing, and some borders - the layout of the quilt actually looks like this if you get close to it. 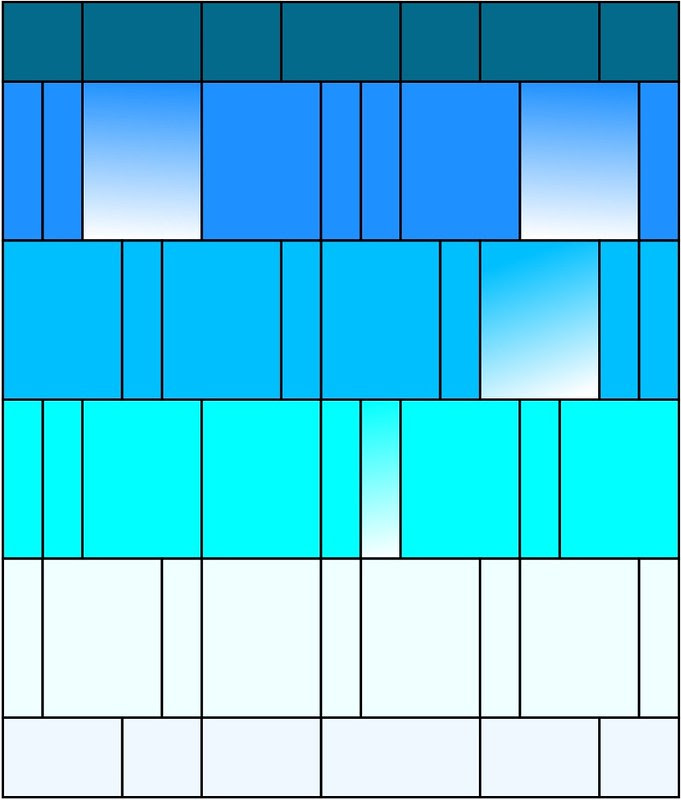 I wanted the water look to be unbroken so I made the binding shift in tone as it went around. 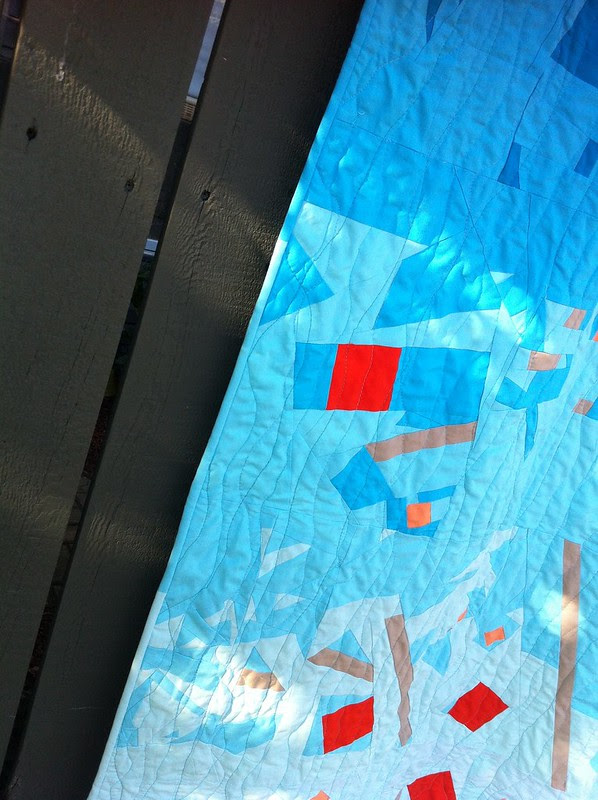 Then I quilted it in wavy, watery lines, broken a little in places by imaginary rocks behind the 'water.'  It's a little hard to believe just by looking at it but there are actually eleven different Kona solids and three different threads.  There is also the handiwork of eleven different people, other than myself, and I can't thank them enough for the beautiful blocks they made. 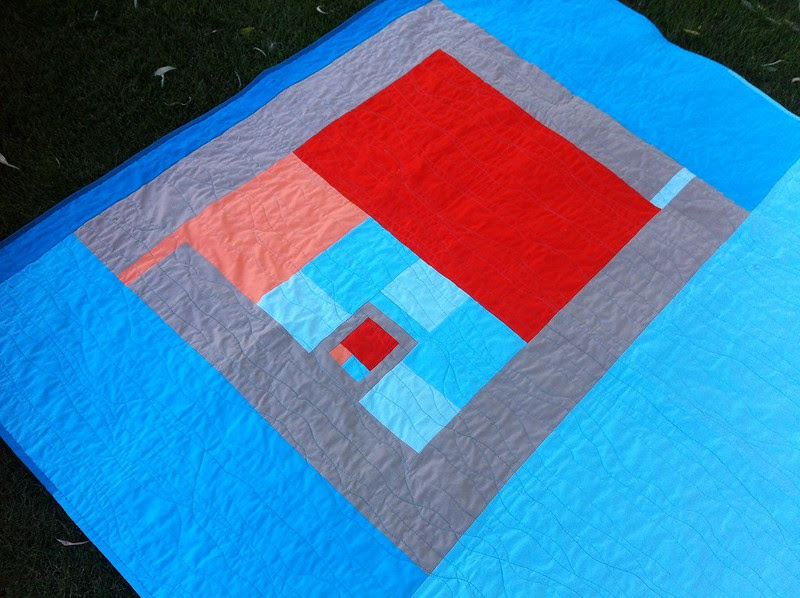 The back was built around one block I received that I absolutely loved (it's based on Fibonacci - how clever is that?) but it kept popping out when I tried in the front layout.  I did my best to emulate the design and make it macro on the back. You can read more about this quilt and how it came to be in this post here. And if you are in Saskatoon this weekend, you can see it in person at SaskatoonQuilts!2013 out at Prairieland. :-) 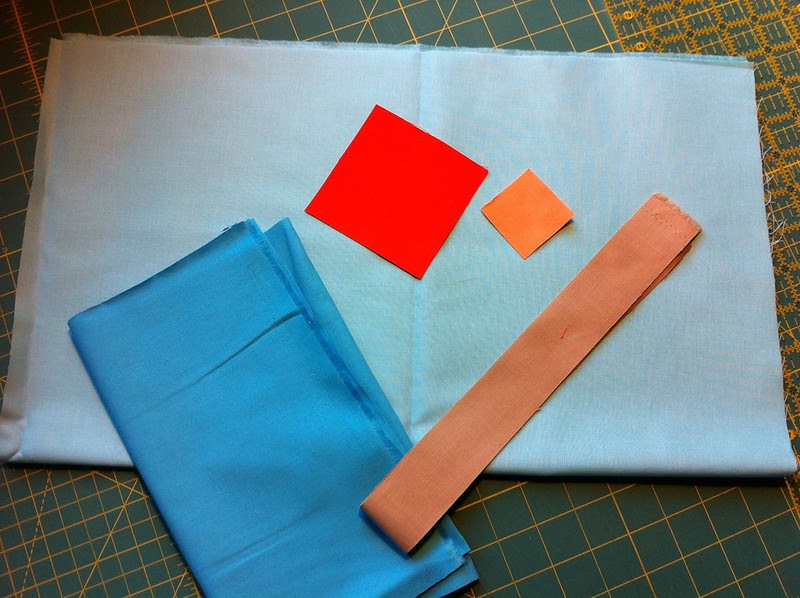 Thank you to Amy Ellis for hosting, all the sponsors who are so generous with their support, and all the other quilters are participating (and you for stopping by!)

Broken record here. Haven't posted, yada yada. Busy, catching up, yada yada. Where does the time go, yada yada. And how do you (completely crazy - in a nice way) people who post once (or more) a day find the time? Yada yada.

We had a long-running challenge over at the Saskatoon Modern Quilt Guild for the summer.  The idea was to make a quilt "Inspired by" something that had meaning for us and to tell the story at the meeting at the end of September.

I racked my brain.  And then, after watching Star Trek (the new one but not the new, new one - Pine but no Cumberbatch) for the umpteenth time, it hit me:  I'm a nerd. And that's my inspiration.

Quilting and sci-fi have a little in common.

1) Those who aren't a fan, don't necessarily understand the draw.  We've all had a conversation with someone who doesn't get why we take perfectly good fabric and cut it apart only to sew it back together again. Or why we HAVE to HAVE the entire line of fabric from Designer X and hoard it until the end of time!  Sci-fi nerds often get odd looks when folks don't recognize a reference or understand the Twitterverse exploding over a new movie, graphic novel or tv show coming out.

2) A language used by 'insiders' - think fat quarters, tumblers, scant 1/4", HSTs, FMQ for quilting...  Lightsabers, phasers, Daleks for sci-fi. Or in the case of this quilt, Red Shirt.

red shirt: the throwaway character on a science fiction episode, (namely Star Trek), who will be dead by the end of the episode, identifiable by his red uniform 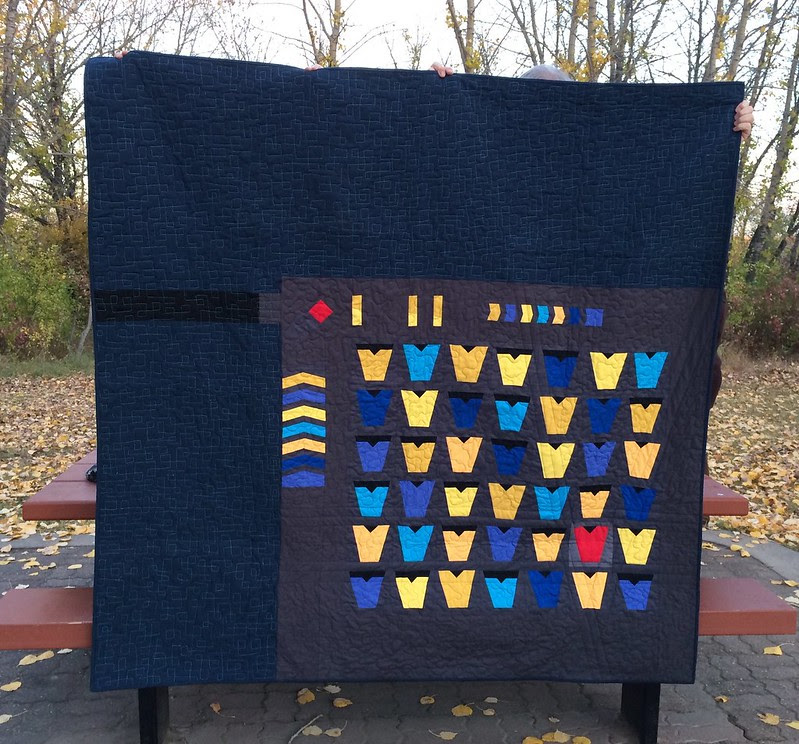 I present to you my latest quilt.  Inspired by Star Trek: The Doomed Lieutenant.

This quilt relies on the idea of the Red Shirt - a no-name officer who'll be toast before long so we don't lose a main character.  Poor Red Shirt, whatever his name is. Was. 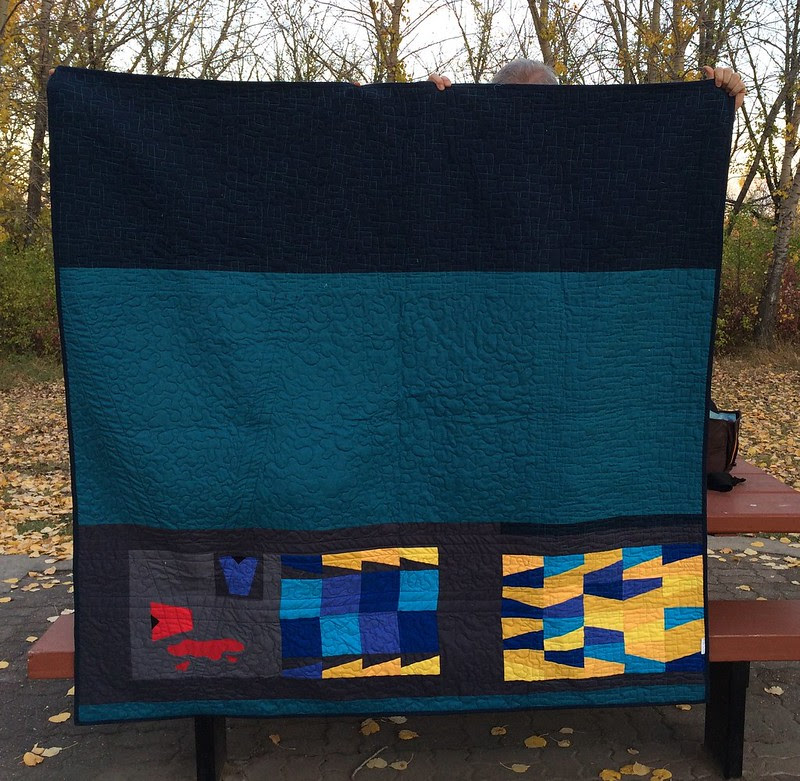 It ended badly for him. 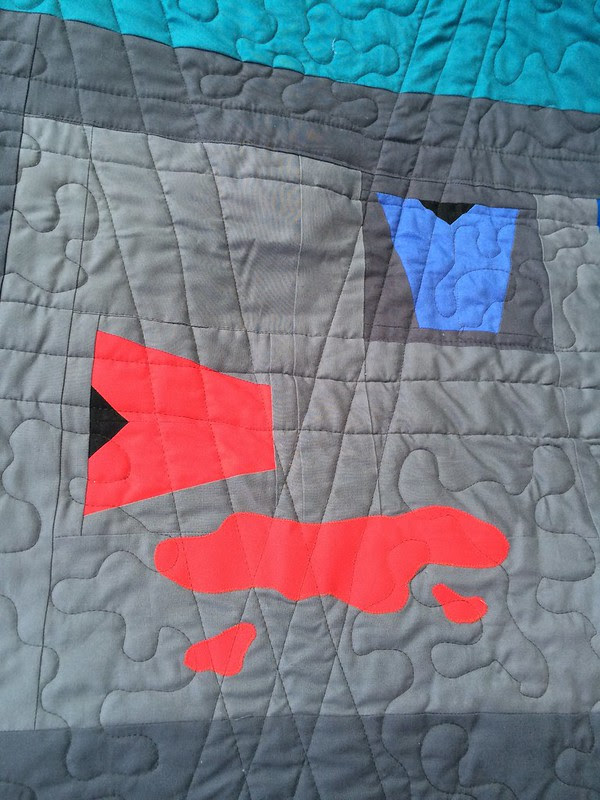 Colours for this quilt were chosen based on what I've observed from Star Trek over the years.  Tumblers represent officers, the navy background is the 'final frontier', and the teal thread sort of makes it sparkly but in a throwback, retro-space way.  I'm really happy with how the quilting turned out. 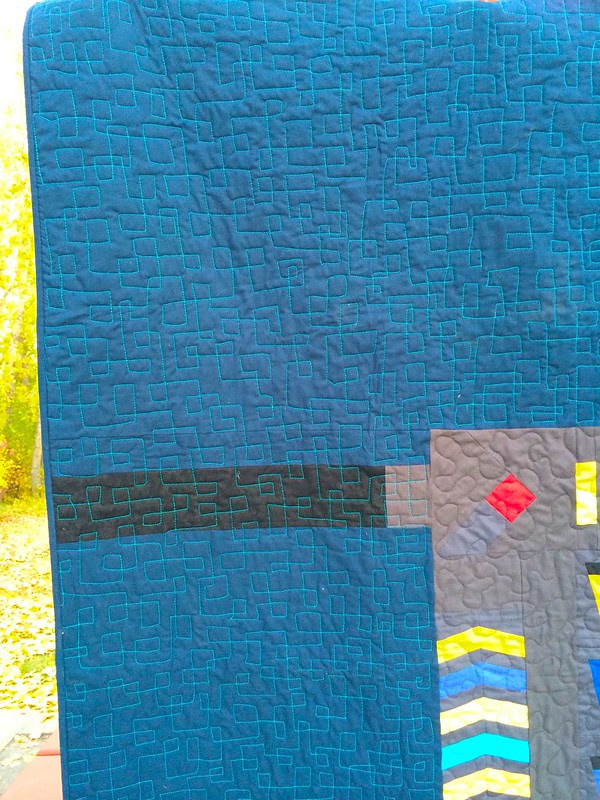 The back was put together using the leftover tumbler halves and yardage.  Approx. 71" wide.

As a bonus nerd Easter egg, there are 42 little uniformed officers on the front of this quilt. Yep, I'm a nerd... :-)  And a proud one. 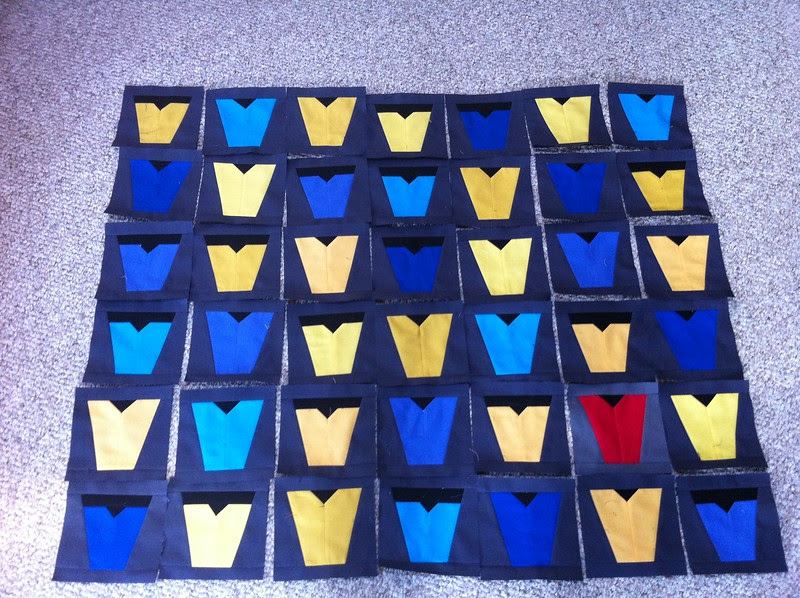 Ok - Gotta go catch up. Again!  Trying to finish before the Blogger's Quilt Festival this weekend...!
Posted by CitricSugar at 6:32 PM 30 comments: