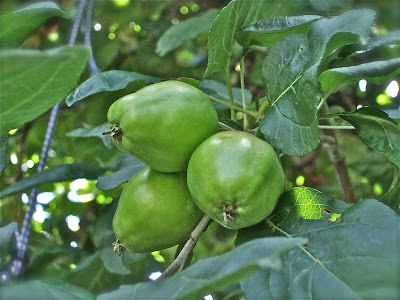 Posted by CitricSugar at 8:47 PM 2 comments:

Another Sweater. I know... 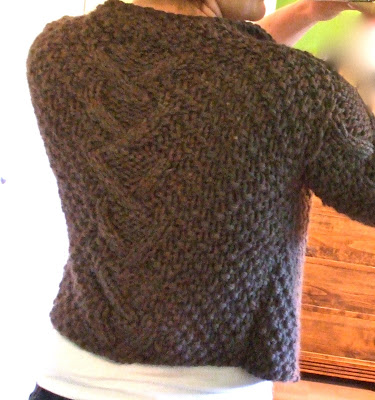 Clearly, I've been keeping my hands busy.  Otherwise, I find it hard to sit still and pay attention to things.  My only rule lately for making clothes is that it has to be something I can wear for teaching, or made entirely from materials I already have on hand.  So while I *did* buy yarn for this one, I can wear it to school meaning it passes muster.  Saw the colour - brown and green and pink all together -  and become irrationally and inarguably convinced I needed to have it. 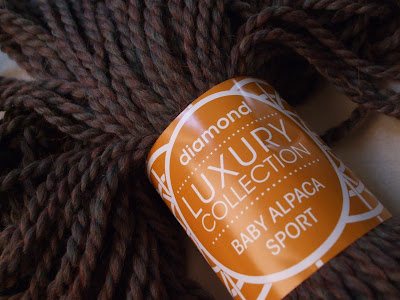 Vogue Knitting, Early Fall 2010.  Cropped cardigan. Knit on 10mm needles.  Took very little time.  Baby alpaca, two strands held together.  It's  SO soft, maybe a little too soft for this project, but you live, you learn.   (And you can't stop rubbing your arms for the tactile pleasure of a cozy knit beneath your fingers... If beds were made from alpaca, none of us would ever get out of them.)
Posted by CitricSugar at 10:37 PM 6 comments:

This recipe was passed onto me by Scott.  Scott is my good friend's sister's boyfriend. (uncle's cousin's dermatologist's paperboy - which makes us as close as Helmet and Lonestar.  Spaceballs, anyone? No?)  I met him once when a large number of us went carousing.  But before we caroused, there was wine.  And tapas.  And these incredibly, ridiculously easy and delicious wings.  I begged him for the recipe.  Begging works. 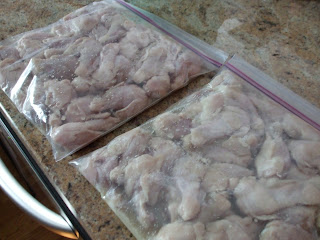 Ingredients:
Chicken drummettes or wing tips, or go crazy and get both
Lime juice, about one cup for every 20-30 pieces of chicken  (You can use the RealLime bottled stuff.  It'll be okay.  It's not considered cheating. But using lemon juice would be.  Use the lime.  Do it.)
Montreal Steak Spice. 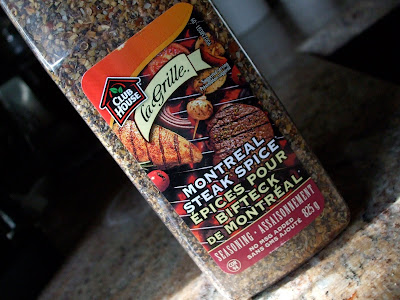 Marinate your chicken in the lime juice for at least a few hours, preferably overnight.  We were lazy today and used ziplocs so that we could turn and flip and toss without a lot of mess.  (Little did we know...  Mess will find you other ways...)
Heat your oven to 350 degrees F.
Place your chicken pieces on greased or lined cookie sheets.  Sprinkle liberally with Montreal Steak Spice. 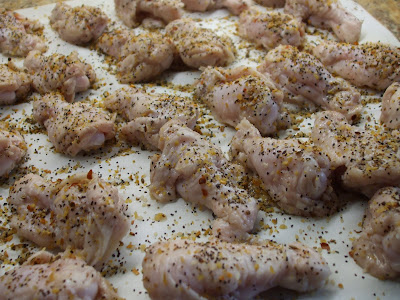 Liberally!  With intent.  In fact, just to be sure, when you think you've added enough, turn your cookie sheet one-eighty and check there is no nekkid chicken from the other angle. 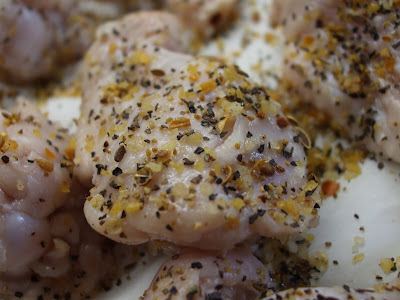 Now, I will point out that I over-crowded my chicken today.  Try to only marinate as much chicken as will reasonably fit in your oven.  Also, use a rimmed baking sheet, especially if you plan to over-crowd your chicken.  Why? You can either cook your chicken on rimmed sheets or use one to hold the scrapings of chicken juice-turned-charcoal from the bottom of your oven.  (I did say that mess finds you in other ways...) 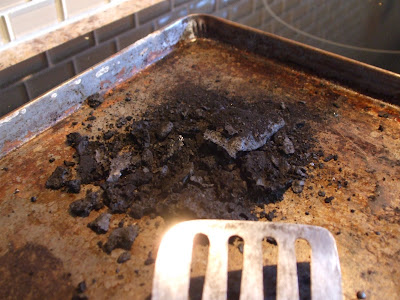 I had made these wings before on a non-lipped sheet without incident but today..., today, I over-crowded and it bit me in the ash.  We had three fans going for a half an hour and had to interrupt cooking for a quarter so just use rimmed sheets.  Do it.

Bake your wings for 30-35 minutes.  Flip and be a libertine once more with the steak spice.  Sprinkly wantonly!  Return to oven for another 30-35 minutes or until chicken is browned and beginning to crisp. 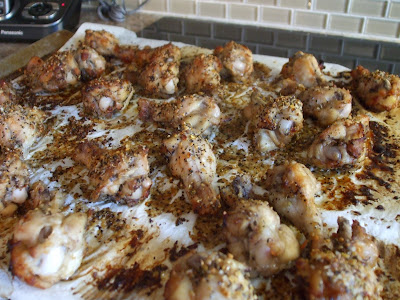 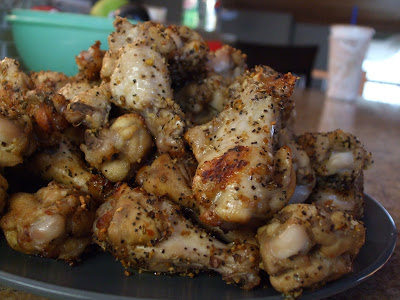 Serve with napkins.
Also goes nicely with a side of sports, particularly if your team is doing well.  Go, Riders!
Posted by CitricSugar at 12:18 AM 7 comments: 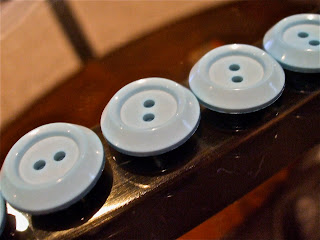 I don't know why I picked it up but before I'd even thought about it, it was in my hand, mused over, and dropped into the pocket of a puffy black coat two sizes too big.
Sasha asked me instantly what I'd plucked from beside the curb on a busy street during lunch hour in a city where sidewalks are really only a guideline.  Sasha was what our teachers called her;  she was actually Alexandra, but Sasha suited her better, so that's what stuck.
"Looks like a button," I said, and ran to catch up.  Riad was almost at the door of our second stop on our cathedral tour and was annoyed that he was again waiting on the girls.  He threatened us with snowballs later but honestly, Kazan had been there for centuries and two minutes wasn't going to affect his day all that much...
The three of us, Canadian, Australian, and Lebanese, were part of a fluctuating gaggle of foreigners studying in St. Petersburg.  It's funny how foreigners collect other foreigners in foreign countries and socialize more intensely with them than with the  people of the country hosting, but our informal model of the United Nations gave us a unusual sense of camaraderie.  Our group collected everyone;  our nation was one of misfit explorers.  We developed our own language, our own customs, our own sense of inclusive identity.  We also supported our collective delusion that we were cool.  Well, we weren't bad.  :-)
The very next night, my roommate Fiona (who can be one of the funnest people on the planet) and I were in the metro when something came spinning into my peripheral vision, pinged against the wall and dropped at my feet.  A button.  I grabbed it immediately as clearly the universe was trying to tell me something.  Fiona looked at me like I was crazy (I get that a lot) and scolded me about picking up random items off a public floor.   She shook her head when I explained about the button from the day before and said, "Alright."
It was weeks later when the third button appeared.  Our Swede, Fred,  had found a shack/tent/restaurant/folk music bar up the beach and decided we needed to eat supper there.  We took Jose, who was only with us for a brief two weeks - but like I said, we adopted everyone.  He was from Panama and raved about how he adored Canada.  I loved him immediately. (If my father had been Panamanian, I'm sure he would've been just like Jose...)
We weren't far from our student dorm when I looked down at my feet and saw a button in the sand.  I shrieked and found myself needing to explain why such a thing was marvellous.  Fred joined the camp that thought I was crazy but Jose listened intently and embraced my impulse.  "You have three now.  Three's definitely a collection!" he said with a smile.  (Did I mention that I loved Jose?)  From then on, we couldn't stop talking all the way down the beach and through supper about things much bigger than ourselves.  Fred was bored, I'm sure, but he was politely bored.
The fourth appeared at my feet on my way home from buying groceries a few days later.  I'd never noticed buttons just lying around before and now they were finding me with wild abandon.  But into my pocket it went.
I made way too much food as usual, and with Fiona nowhere to be found, I called up to Fred and Mike's.  Mike was presumably on a cracking adventure downtown with the absent Fiona but Fred was definitely hungry.
"Jose left today.  And he left you a present."
"What?" I said. " I met him once."
"Oh, it gets weirder..."
When I buzzed Fred onto our floor,  curiosity stuck my head out the door until he came around the corner. He walked toward me with his hand outstretched.  On his palm rested a button.
"He found it on Nevskiy Prospekt today.  I was with him.  I would've kept walking but he insisted I bring it to you."
I smiled.  I'm sure now that Jose had understood then what I was just beginning to grasp.  There was something going on and I just had to believe.
Posted by CitricSugar at 8:35 PM 2 comments:

Not much to say today but I did have a knitting finish last week (and two knitting starts - seriously, what is wrong with me?).  It's almost too late for "lakeside" frolicking as the weather is starting (somewhat) to level out.  We've had rain Thursday, Friday and into the wee hours on Saturday but the rest of the weekend was dry.  (Yay!)  Of course, we're expecting another dousing tonight... 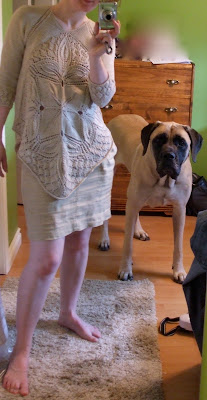 All 145lbs of Niece Dog wanted to help but she's useless with a camera.  Unless you need it to be eaten, in which case, she would be outstanding!  She was visiting this weekend and is a little clingy, which can be comical since she leans against you in "hug" mode and can push you over without meaning to do so.  Strangely enough, the above photo makes her look small.  She's actually standing 500yards behind me and had Tokyo for breakfast.  :-) 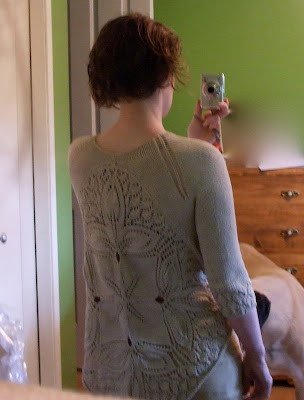 I'm satisfied with the fit but the linen/cotton blend I used had some unusual dye-shifting during initial blocking.  Once sewn together and and rinsed (Twice!!), I still can't seem to get rid of the odd saturated spot, but you can't really tell unless you're close up.  Now that it's washed, it's also quite stiff and needs to be taken down to the river for some old-school beating against a rock.  Anyone have any recommendations for softening stiff fibres?  I'm trying to avoid the dryer if I can... 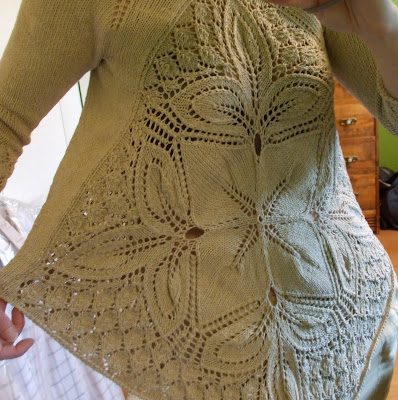 Pattern from Vogue Knitting Summer 2010; I can't find the label from the linen...  It's been that kind of week.
Posted by CitricSugar at 8:16 PM 8 comments:

Holiday Weekend at the "Lake" 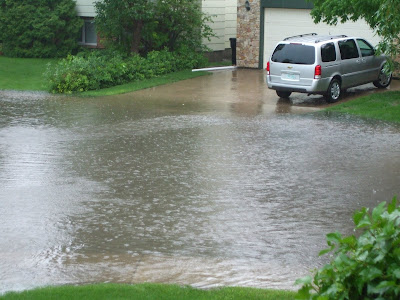 Oh, how I dream of spending summer weekends at a cabin at a lake!  Trouble is, I don't have one.  This Canada Day weekend, the lake came to us.

Tuesday, we indeed got the storm predicted for the area.  It came with torrents, hail and a tornado watch.  The street flooded all the way up to the garage door of the house and into the cars of anyone unlucky enough to have parked in the street.  It's not that we don't have storm drains.  We have three on this corner alone (which is why the street is graded towards them) but we've had so much water this year (3 to 4 times normal), the drrrains, they canna' take it, Cap'n!!  Local farmers are considering changing crops to rice, bamboo, and freshwater algae.

Then came Friday.  That's when I took the above picture.  And these ones: 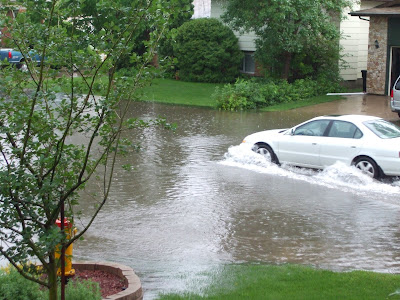 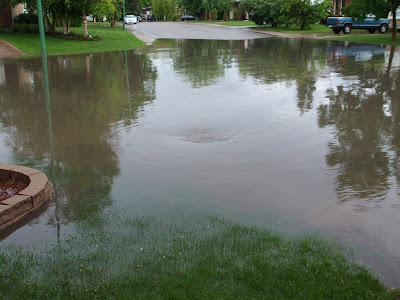 You can see one of the eddies.... there's a storm drain these somewhere...
Saturday wasn't too bad.  I baked. 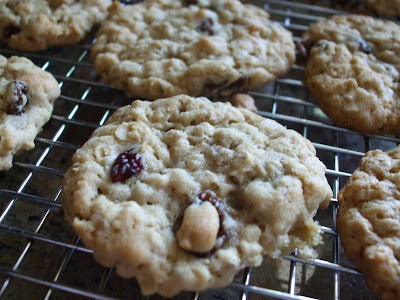 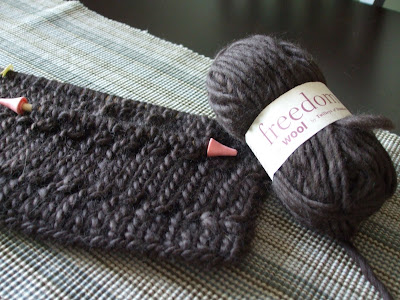 Sunday, it started raining again.  It hasn't stopped.  So I'm trying to enjoy the scenery. 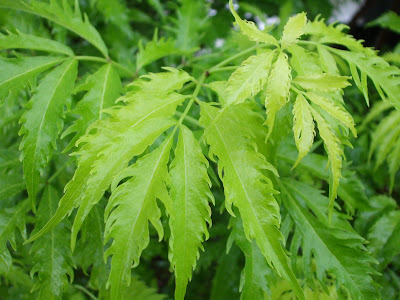