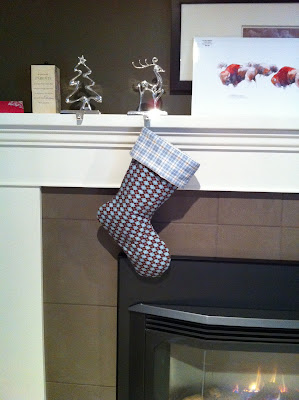 This post has been imminent for a long time. Ha!
I have survived my first semester and started back at classes this morning.  The holiday was a whirlwind and I owe a great many emails and back comments - if I've been quiet on your blog lately, it's because I haven't had the time to read it for the last two and a half months.  Sorry - but I know you understand and you know that I'll catch up.  Thanks for the well-wishes!  You'll be pleased to know that the first round of marks were of the RockStar variety so my focussing was not a waste of time...
I made very little in terms of gifts this year unless you count making naps and butter tarts a priority.  I made a quilted stocking and a baby blanket (of which I apparently took pictures with the camera NOT currently on my person.  Read: not my phone.)  They were made to match and to grow a little with their recipient and went under the tree to be opened by expectant parents.  And now, I have a few moments, sitting in a hospital waiting room, wallowing in our catastrophic World Junior hockey gold medal loss, with two hours of sleep in the last 38,  waiting for the arrival of the person I have been more excited to meet than anyone before in my life.  Nephew is Imminent.  Impending Nephew.  Incoming!!
I attended all four of the classes I had today, despite the action.  Plus, the fact that the hospital is on campus made it much easier to zip over between them. All my new college buddies are awaiting word.  He's Eminent as well as Imminent, my Nephew.  I'm exhausted but giddy.  And WAY too caffeinated.  Which explains the silly word play.

I hope that your holiday - no matter your creed or tradition - was filled with hope, anticipation of the new year and  all things good.  Mine, other than the hockey game, most certainly was.