The tree came down last weekend and my desk returned to its place in the corner, but along the other window this time, which has freed up some space.  I'm still in the process of getting organized but I'm getting there. Given that this new setup has led to long, uninterrupted stretches of sewing, I have taken full advantage. 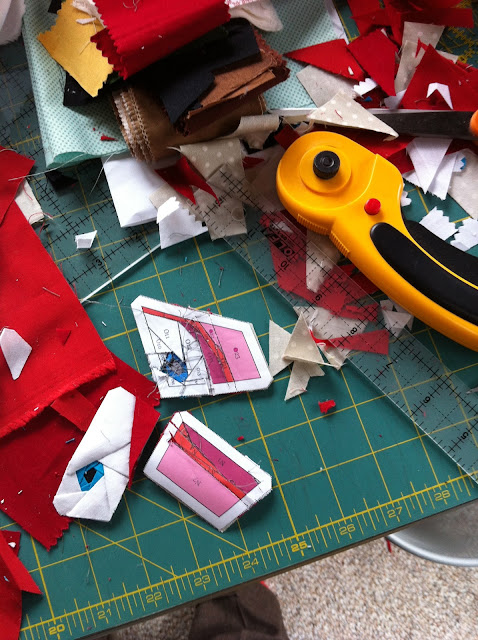 My nephew's 2nd birthday was on the 5th and while I did give him a bunch of Hot Wheels, I hadn't finished the other half of his gift until this past Wednesday:  the bag to put them in. 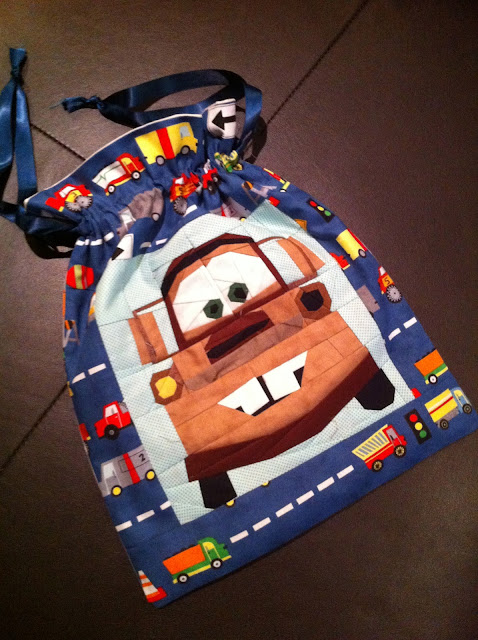 I found the paper-piecing patterns on Fandom In Stitches - totally free - and then I framed the results with a lovely little traffic print, lined it with the leftover solid from Seester's quilt and added two ribbons to act as drawstrings. It finished about 12x15".  He was thrilled. "Oh!  MAY-turr...!"  Happy boy, happy auntie.

The other advantages of gaining back the workspace is that I was able to cross off a goal by organizing my scraps.  I went from this... 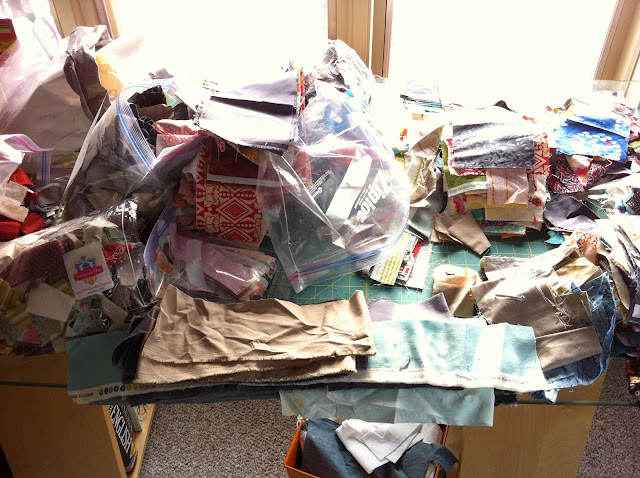 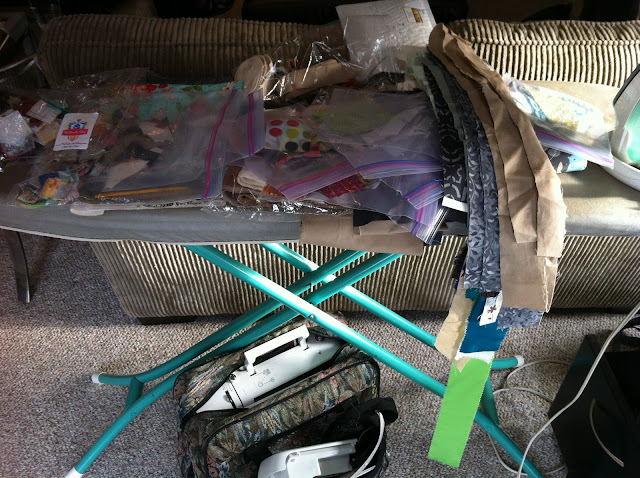 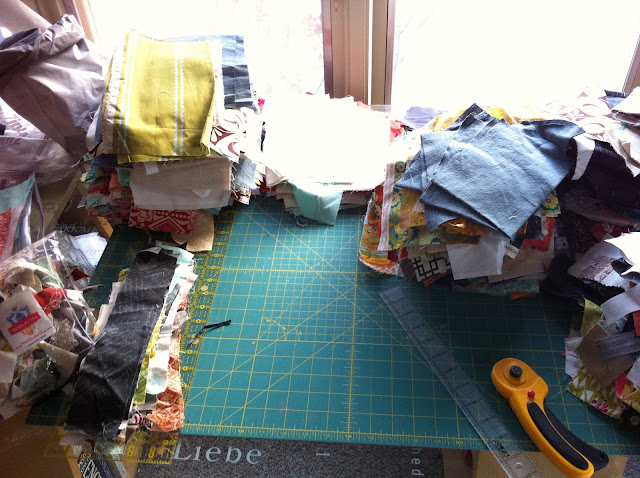 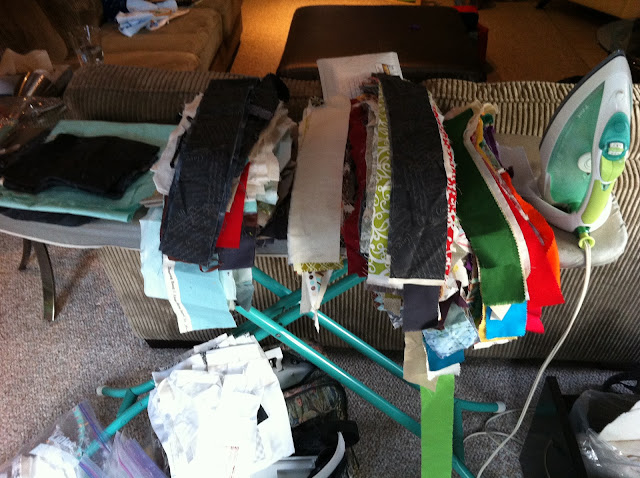 Neat and tidy. Well... they're contained, anyway.  I would like to organize further but right now, they're sorted by size. Crumbs and short strips in the orange bin, everything else sorted in large ziplocs, etc, in the white laundry hamper.

The sort also allowed me to do something I swore I didn't have time for... 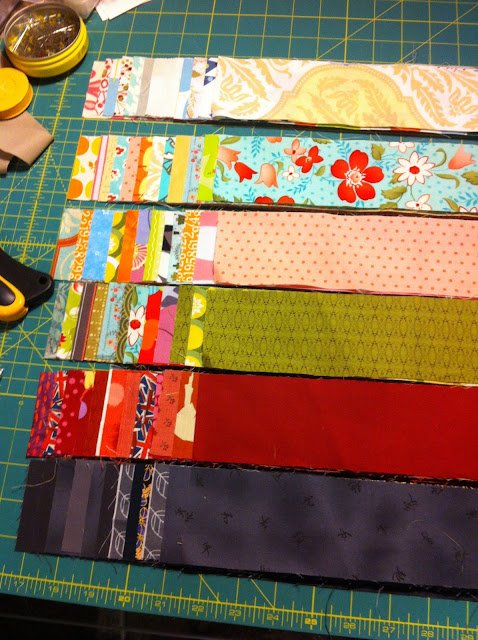 I drank the kool-aid. 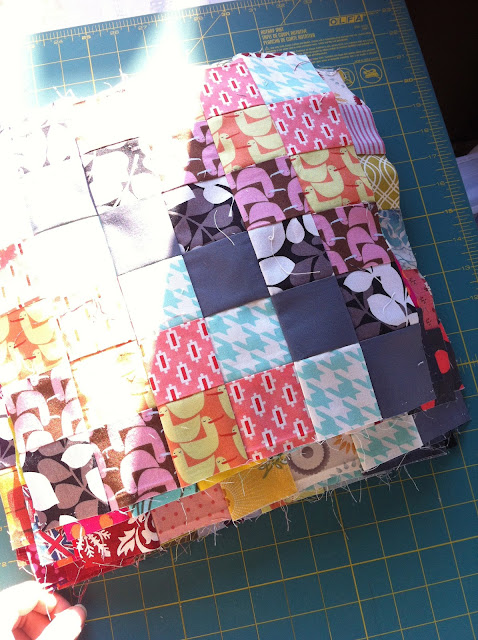 Within a two week period, it seemed that almost every feed in my RSS reader was throwing Scrappy Trips at me.  I'm not generally a joiner in the "everyone's doing it" sense (I still haven't seen Titanic, and don't intend to) but they were so pretty! And EVERYWHERE.  It was a bombardment; I was hiding in my "I don't have time" bunker but being shelled within an inch of my quilting sanity.  I came out waving my white flag. Of scraps.  That was my one rule for myself:  I had to use only scraps for these blocks.  What will happen with the back and binding? Don't know.  But for now, I'm pleased (and sickeningly shocked) that I made 36 blocks without cutting into yardage.  That's a sizeable dent in the old scrap heap, eh?

And then there's my first ever bee block for the Simply Solids Bee.  Never done a bee before but it was on my quilting bucket list, so...  Lethargic Lass asked for asterisk blocks - and they were much more fun than I thought they'd be; the fabrics she sent were different than what I usually use, too, so that was very enjoyable!  I threw it in the mail last week so she should have it soon. 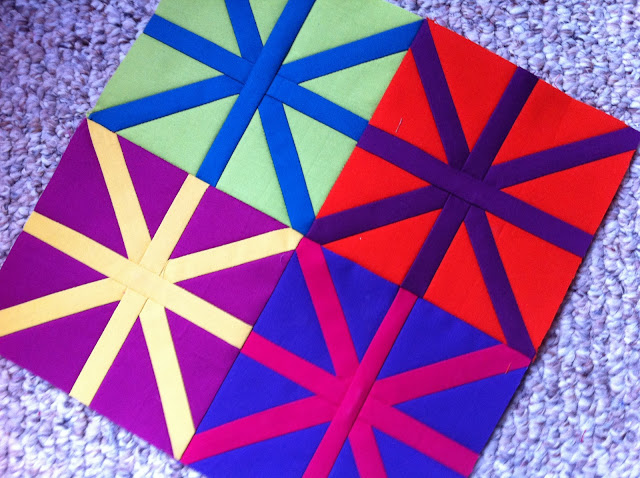 Believe it or not, I actually got MORE sewing than that done last week and I have the iron-steam burns to prove it. But why spend all my projects on one post...?  :-)

Have a stellar week!
Posted by CitricSugar at 7:52 PM