Shadow Blossoms and The Punisher

Happy New Year!  I hope you had a fantastic end to 2012 and are already having a spectacular 2013.  I am already tripping over my feet trying to keep up and I'm hoping that will have disappeared by February.  :-)  One of my goals for the year (subject for another post) is to get a little more organized with my time and start editing in various areas of my life.  I've already started with my bedroom closet; the great weeding of 2013 has begun!

I can FINALLY show you some of the things I made as gifts for Christmas. It'll take me a couple of posts but I'll start today with the big ones.  The photos are not stellar - due to a lack of quilt holder-uppers before the day and lack of sunlight and reasonable temperatures after, it's been difficult to get a good shot.  Indoors on a cloudy day.  Blergh!


Shadow Blossoms
I have already mentioned here that Seester requested a bed quilt to go in the bedroom she painstakingly redecorated this summer.  As I had already been planning to make her one for Christmas, I confessed my intentions, we discussed colours and fabrics, a loose idea of a design, and away I went.  Once fabric was purchased (mostly Bonnie&Camille Vintage and Ruby), I okayed it all with her but that's the last she saw of it until Christmas morning. 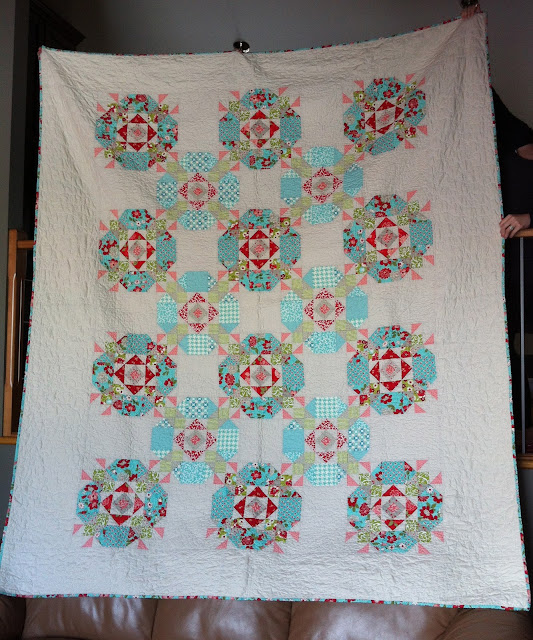 The quilting is a mix of meandering for the main and giant pebbles in the border.  I had started out with intentions of doing much more complicated free-motion work but was stymied by both my lack of FMQ skill and the sheer size of it.  It'll fit her queen-sized bed with plenty of pillow-tuck and drape space. Big quilt. HUGE!  (Did anyone else think Julia Roberts in Pretty Woman just now? Anyone? No?) 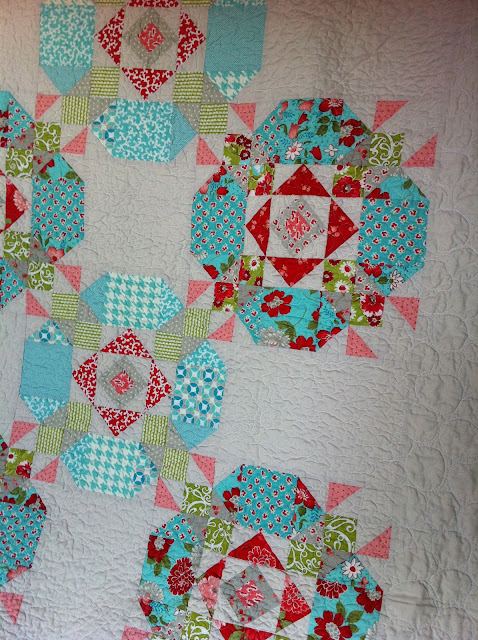 Alas, this was the best shot I could get of the back. 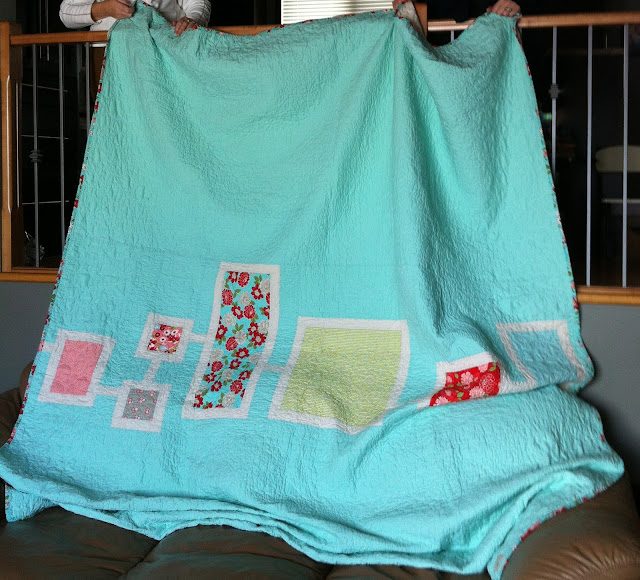 I'm happy with the way the design worked out - it's my own, right from scratch, and I'm working on a pattern for it.  I do wish the fabrics we'd agreed on had more contrast in value so that it looks more like shadows from stained glass but she loves it so I don't really care. 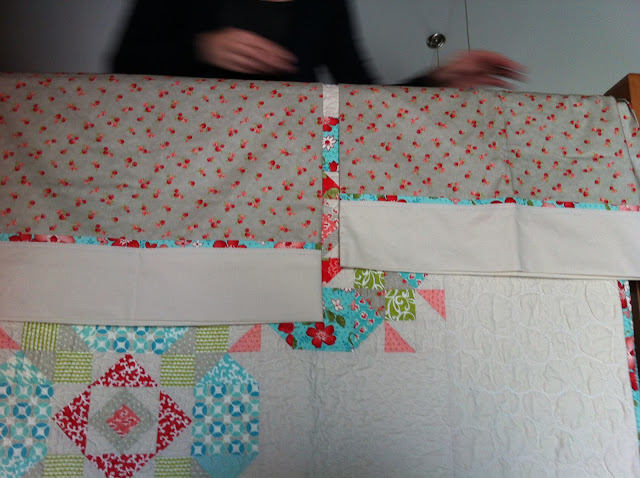 She also got a set of matching pillow cases.  I used this tutorial. Very easy, French seams and all.


The Punisher
The gift I was most excited for this year is this one. If I didn't make him a quilt, he'd be the only member of my immediate family that didn't have one.  However, looking at him and his interests, "quilt" is not generally a word that would make the short list of gift ideas. My brother-in-law is a giant(!) and a giant fan of the comic book vigilante, The Punisher.  This skull is his symbol.  Inspired by Dan Rouse's (Piece and Press) totally amazing work, I decided to do it in reverse appliqué. Not wanting it to be boringly solid, I decided to piece random backgrounds (another post) so that the quilt would have a visual texture to it. I had no idea if it would actually work but I gathered up my fabrics, crossed my fingers and started cutting like a hairdresser with no concept of consequences... 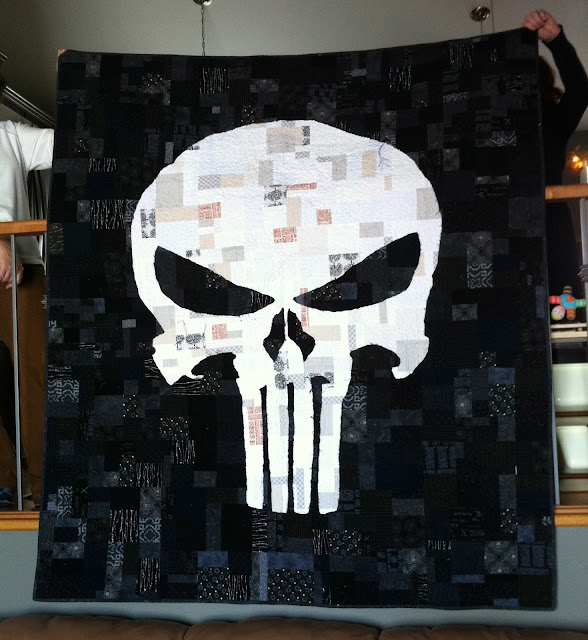 The skull is quilted in random jagged lines - very sharp and pointy - while the black is meanders.  I also added a few black "cracks" in the skull.  It turned out exactly like I envisioned even though there were moments in the piecing of the backgrounds that I had serious doubts.  The blacks didn't seem black enough, the whites were going to be too beige, it was all going to be a huge mess...  But it wasn't!  Put black fabric next to white fabric and all is right again. And cutting away the appliqué left all these marvellous raggedy edges after washing. 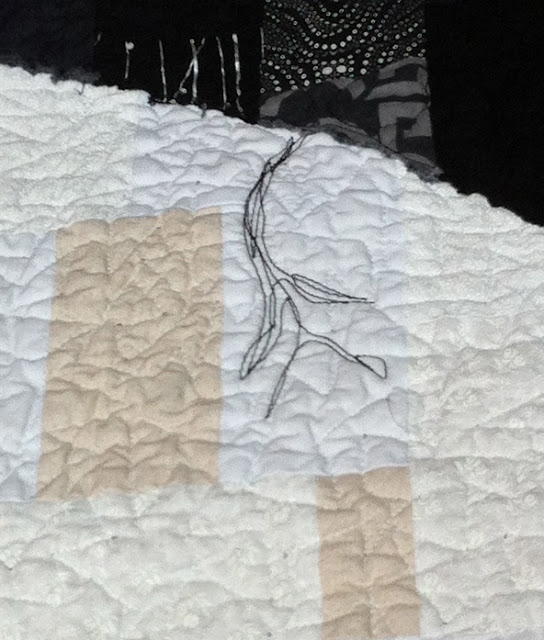 He was completely excited when he opened it.  He stood to spread it out and get a better look, and referring to the super-impressionable and parrot-like toddler at his feet, said, "You have NO IDEA how much I wish I could swear right now!"  Ah, there's nothing like censored curse words of appreciation...! :-) 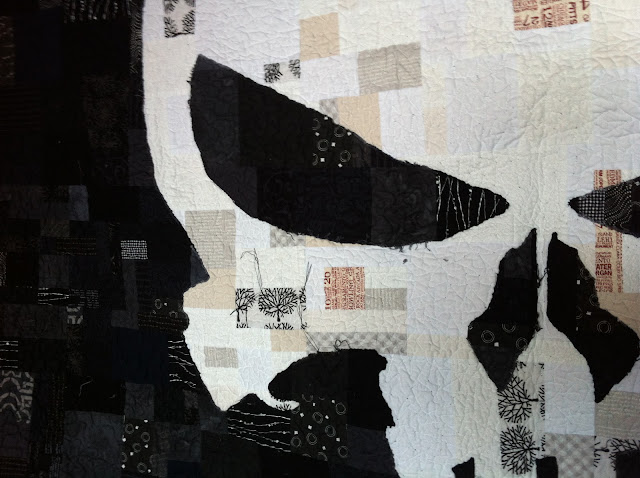 The back was pieced using leftovers from the top.  It's just over six feet high and five wide, not quite big enough to fit on a bed. On purpose.  Seester thanked me for that.  :-)  It will go in his man-cave and their newly finished basement for movie watching. 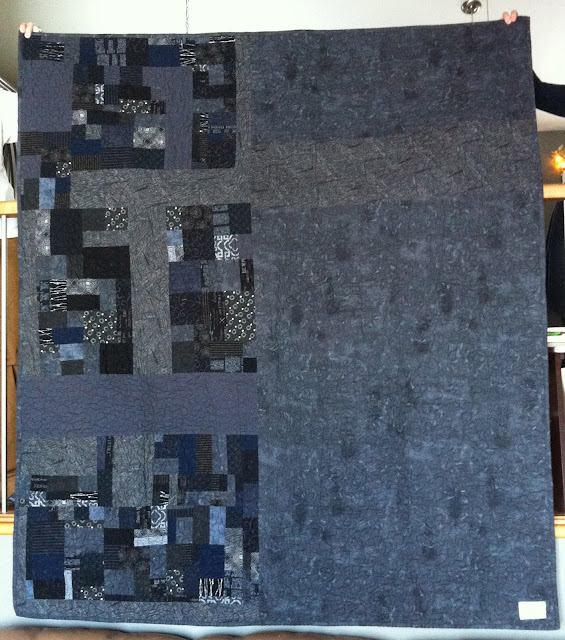 So that's round one!  Thanks for reading this rather long post with very sad excuses for photography. :-)  I'm off to get working on those goals... Did I mention I joined a bee?
Posted by CitricSugar at 4:11 PM