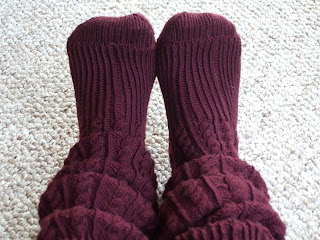 I have finished knitting my first pair of socks. I started them in January. I finished them about 11pm last night. Were they a success? Yes. And no. First, I was a tad overly ambitious when I chose over-the-knee cable-knit as my first pair of socks. I thought, hey, I've cabled before. I've knit on double-points before. What could go wrong?
Ah, hubris.
I knit mittens. Lots of them. And insane amounts of them at Christmas, on top of other insane Christmas projects I foolishly decided I had time for last year. So, by January, my hands were tired to say the very least, and beginning to freeze in a claw-like configuration reminiscent of the velociraptors in Jurassic Park.
The cable pattern repeat on every fourth row. Needless to say, after checking gauge, doing the cuff of one and maybe three cable rounds, I put them down and 'neglected' them for a while. Say August, for instance. 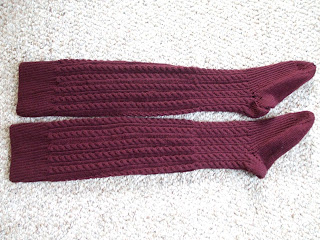 (Yes, they are the same size - pictures distort sometimes. But there they are - all 22" of them. Each.)
I did an awful lot of learning on these and had a little trouble with the heels - the bits where the short rows turn are quite obvious - and struggled with laddering where the needles met, which isn't normal for me. I can't figure out if it's because I knit quite tightly or if it's something else I'm doing wrong. I do knit with a bit of a strangle hold on the yarn so I'm guessing it's my tension.
Regardless, they will be cozy this fall and will look pretty good with a knit dress I have. I can pull them up or slouch them down. Fabulous! 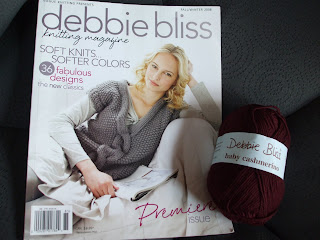 I grabbed the pattern from Debbie Bliss knitting magazine. I'm quite fond of her patterns but her yarn is not carried in the city here. It tends to run a little on the expensive side so people tend not to buy it and stockists tend not to stock it. Sigh. Too bad because it is beautiful to work with - it knits beautifully and doesn't murder your hands in the friction department.
There is also a pattern for lacy ankle socks in this magazine that I should have tried first, and will be the next socks I tackle, once I've given myself a grace period. A long, sock-free grace period.
And now, I think I'm going to bake something.
Posted by CitricSugar at 1:58 PM