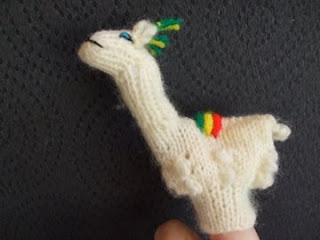 Sometimes, acting like an idiot leads to wonderful things...
I've been a member of an improv comedy troupe (The Saskatoon Soaps) for about eleven years now. As part of a gig we were doing for a season sponsor, a large bunch of people from various different places were split into groups and sent on a scavenger hunt through a few businesses in downtown Saskatoon. We acted as the location judges in charge of clues and signing each team's guess forms. In character. Good times.
It took awhile for the first group to get to my post and, naturally, I took advantage to thoroughly browse the shop's inventory, which includes a number of fair-trade items and organic clothing. (YAY! I will be going back when I'm on my own time.) HOWEVER, as I was in goof-mode, I was very attracted to these wonderful little knit finger puppets made by Ecuadorian children. There were tigers, elephants, alligators and llamas! These gems kept me marvellously entertained between scavengers.
When my goof-time had come to an end and I returned to plain clothes, the lovely shopkeepers gave me a llama as a thank you for being their store's oddball.
So THANK YOU to Kim and Tammy at Amos&Andes Imports. You made my day! And inspired many rounds of singing "LaBamba" as LaLlama" - great fun! 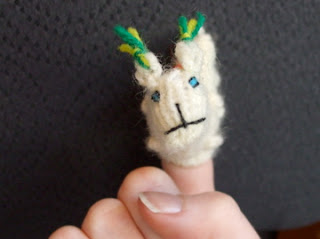 And so I leave you today with the reassuring fact that finger puppets are entertaining no matter how old you are...
AND a poem...
A one-l lama, that's a priest.
A two-l llama, that's a beast.
But I will bet a silk pyjama,
that there is no three-l lllama!
--Ogden Nash
Have a great one!
Posted by CitricSugar at 3:52 PM