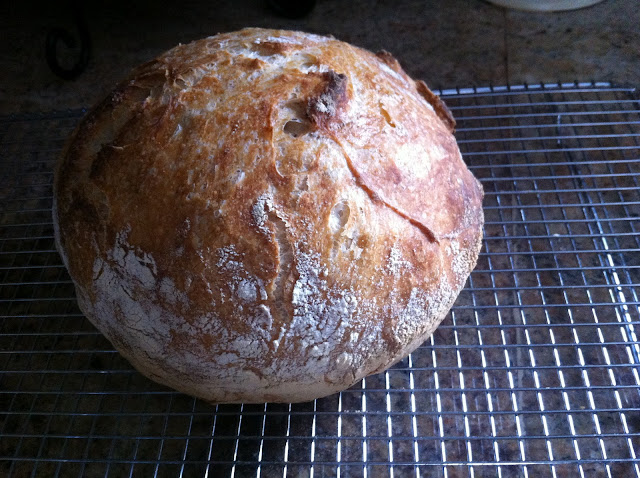 It snowed here this weekend.  Sure it was all but gone by Sunday afternoon but the return of white after every indication that spring had begun send a message to my belly. Soup. And soup requires bread.
I finally tried the Dutch Oven No-Knead Bread that had popped up in weblogs all over the better part of the last two years. It never ceases to amaze me how this 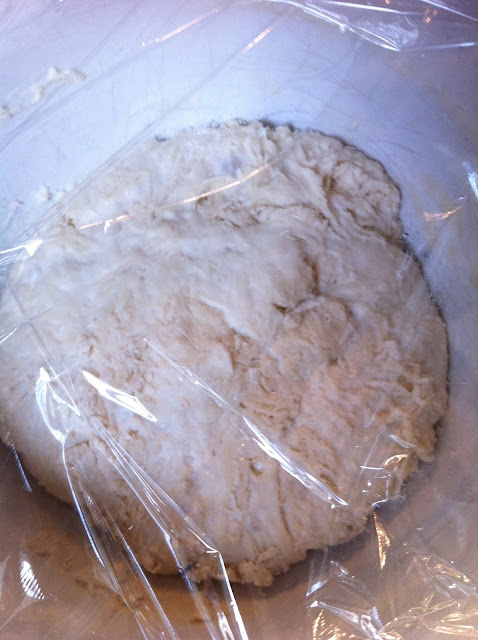 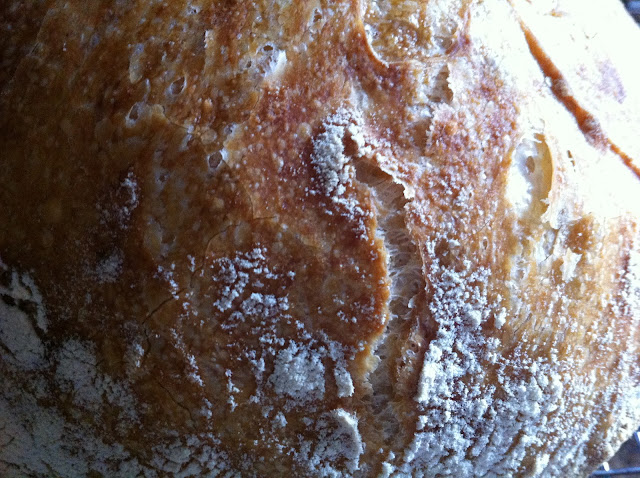 I made a few mistakes. I a)let it rise too long since it said 12-18 hours - I think I left it 20-22; b) had my oven too hot - my independent thermometer was not on the oven rack as usual so 475 degrees was probably closer to 500 and the bottom got a little scorched; and c) I forgot to slash the top. I meant to, but when I flipped the dough into the pan, flour went everywhere, and I got distracted. I had a little flour up my nose. But the mistakes weren't a huge deal and it won't stop me from making it again.
It was the perfect, dense, chewy loaf for my chunky potato soup.  And the day after with leftover soup, it was even better.
***
I cannot for the life of me manage to get a good photo or two of my new sweater which I have worn twice already.  Oh the tumults of lighting and needing someone else's hands... I'll try again tomorrow.
I'm also dealing with a sore shoulder from too much knitting.  The first week of playoffs have meant over 42000 stitches for my scrappy afghan.  I have yarn burn on my throwing finger. Probably looking at a suspension, though there was no intent to injure so it's unlikely I'll be putting down my sticks for more than a game or two. :-) I tried to find a better pair of needles today but no one had 3.25mm circs in a length longer than 12". Amazingly, I walked into a hockey discussion at the knitting shop. The unprecedented circus of violence that has been the first round makes for a interesting debate amongst the lace weight and chunky skeins...
Posted by CitricSugar at 8:24 PM