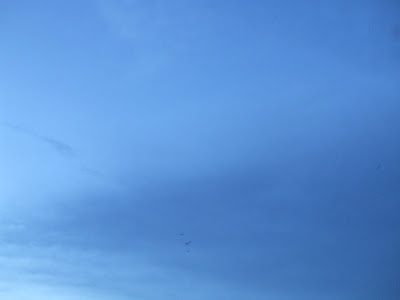 On the street where I grew up, like the streets where everyone else grew up, you could mark seasons by the sounds.  Summer brought the whir of lawnmowers, the subsequent clank when one mower would pick up a rock and send it shooting across the sidewalk, the clickety-tap of neon-coloured beads on bicycle tires,  or engines revving as teenagers took to drag-racing down the stretch after curfew.  In winter, metal shovels scraping against cement driveways, toboggans dragging on asphalt behind sixty-pound children wrapped in eighty pounds of scarf, and tinny, choking engines trying to turn over.
Regardless of the season, you could hear the kid across the street firing hockey pucks against the garage door.  But the timbre and pitch of the bang would let you know if it were a crisp autumn morning or a balmy spring evening.  It was a constant reminder that it was an ordinary day in an ordinary neighbourhood.  To this day, the sound is comforting and bittersweet.
Tonight, that kid from across the street hoisted the Stanley Cup.   Ordinary day for me.  Extraordinary day for him.
They put residential speed bumps on the stretch, we moved to a crescent, and most people have replaced shovels with snowblowers.  But no matter the season, there's always a kid banging pucks against the garage.
Posted by CitricSugar at 11:05 PM