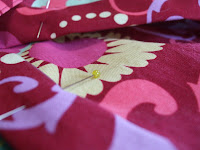 Okay, so I lied about the Love when I said I wouldn't use it to make the Liverpool tunic. Love's a funny thing. But I didn't know I was ordering it when I ordered it. And WHOA. That print turned out to be a LOT larger in person. It was "punch you in the face" larger. I have come to terms with the practically audible nature of it. But I merely 'like' it and don't officially 'love' it.
The most shocking part of the whole thing is that I took my time with it. (Almost a week.) No big marathon sprint. With projects, I can sometimes tuck into them like a rottweiler with a t-bone and not come up for air until there's nothing left. But I didn't rush it and I still had to take the collar off three times before I finally gave myself a seven and moved onto the next hole. (Mini-golf. Anyone? No?)

I had no idea the pattern had ties on the back or button detail on the cuffs when I bought it. I discovered it while reading the pattern through before I started. And it took a bit of figuring since there were no diagrams of the cuff detail. No pictures outside, no diagrams inside. It's almost as if they structured the pattern with built-in "Enough-for-now-I-need-a-Diet-Coke" breaks. I am pleased with how it turned out, even if I tend to wear more neutrals and solids. I can always make it again sometime. Once I come to terms with collars, that is...
Haughty Supermodel Attitude Pose: 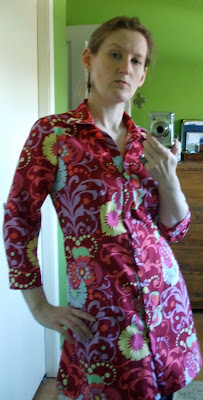 Terrible picture of back detail which looks like I'm burping a baby Fuji FinePix: 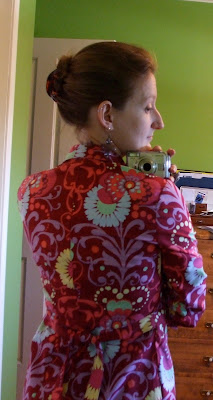 So that's what I was doing all week, next to trying out my skis and not dying just in time for the snow to disappear early and catching up on the Oscar picks. My vote goes to The Hurt Locker for Best Picture but I'm not a member of the Academy.
Next post: A basement so creepy, it could scare clowns.
Posted by CitricSugar at 3:04 PM