It's a long weekend here and I've been whacking away at my to-do list like machete-wielding action hero traipsing through the jungle.  I've also had to battle giant tropical wolf-spiders.  Okay, not so tropical but lightning-fast and definitely unwelcome in my bedroom!
On the list:  Get books under control. 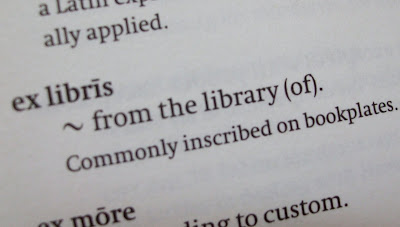 Because I am a nerd and I am accumulating tomes, textbooks, and tutelage at an alarming rate, I decided I needed to start putting my name in things.  I might fail to recognize one of the new books as my own until I've ravaged it cover to cover or it might be swiped by someone less diligent about getting to the bookstore before they are sold out.  And I'm a lender.  I lend things.  Then I forget to get them back.  Also, my inner five-year-old likes putting her name on stuff. 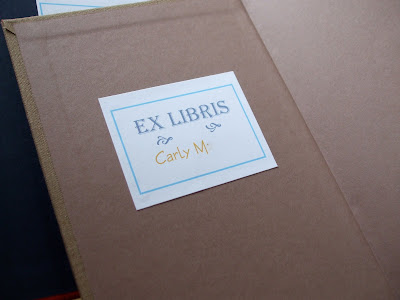 However, I didn't want them to be overly fancy, with trees or etchings, or too young, with balloons or giraffes.  A simply pretentious Latin phrase would do for me.  But I couldn't find ones I liked.  So I made some.  Sixteen to a standard sheet of pretty paper - you can't really tell from the photo, but it has flecks in it.  I took time to find the right paper - I could've used a self-adhesive sheet but I hate how the glue eventually discolours the paper and fuzzes out the inks.  Also, expensive.  Also, without nostalgia of "lick'em, stick'em" bookplates of my childhood.  They apparently don't sell "lick'em, stick'em" in my neck of the woods.  I looked.  Twice. 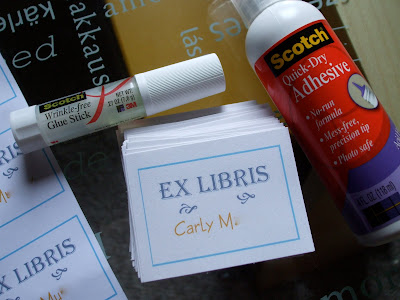 Two glues were tried - wrinkle-free glue stick and quick-drying, photo-safe glue from the scrapbooking aisle.  I have to say that I liked the liquid much better and it seems to have much better hold.
If you would like your own Pretentious Latin Not-Fancy BookPlates, I made you some too.  And you can use the sticker sheets if you want to.  I won't judge.

Pretentious Latin Not-Fancy BookPlates. Click for download.  (Via Scribd.  Because I'm a book-nerd and less a computer-nerd so that's the only way I know how to do it. :-)

And you know the nerd labeled this one.... 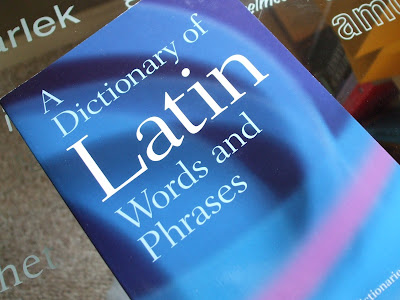 I also went all kinds of Goodwrench/Martha Stewart/Mr Clean on my car on Saturday.  It was sweet.
Posted by CitricSugar at 11:42 AM