I disappeared for a while, lost amid the transitions.  I was hijacked, distracted, and more than a little intimidated by the idea of a hundredth post.   For 100,  I had no desire to write about the latest sweater (though I will), about gutting my closet like the victim of a Roman campaign, a fabulous little meal from a borrowed kitchen and the hands of student chefs (though I will), or relate another anecdote from my button story (but it's coming).  Nothing seemed right to me.  It's a milestone, albeit a somewhat arbitrary one, and I felt the need to mark it.  And after running into an extraordinary teacher today in one of my favourite art gallery/cafes, I had the moment where I figured it out.

There was a sessional lecturer in the Department of Drama that used to teach a theory on breaking down plays, scenes and monologues.  To absorb a piece, it needs to be broken into manageable chunks.  The Birth, The Life, and The Death.  Easily identifiable but still too large.  So you take it further and each chunk has its own Birth, Life, and Death.  The Birth of the Birth, The Life of the Death, and so on.

I'd been in a funk and now I find myself in a swirl of creation and transition, and running break-neck trying to catch up.
I am winding down at the best job I've ever had and winding up to a period of intensity and learning.
I am two weeks from 32.
I am 6 days from the first anniversary of CitricSugar.
I am 4 and a half months from becoming an aunt (and the word from the ultrasound today is Nephew!)
I am no longer who I was _____ (then, before, ago, earlier, once, yesterday).
I am a woman with curlers in her hair.

I am passing out of the Death of the Birth and into The Birth of the Life.

My life.  And I can't wait to get to it.  I had focussed too much on what was already behind me.  The conversation I'd had at the cafe sparked ideas in my brain and sitting in my car after on-campus errands, it struck me.  Time to redirect my attention and ABSORB.  Embrace the metamorphosis!  (Not to imply that I plan on waking up as a beetle tomorrow....  Kafka, anyone? No?)  This is a transformative time and like a photo taken in a mirror, it's tough to get the right perspective.  But it's possibilities that excite me.

I always become a little introspective and often maudlin around my birthday.  As odd as it is to say, one must always remember the future. 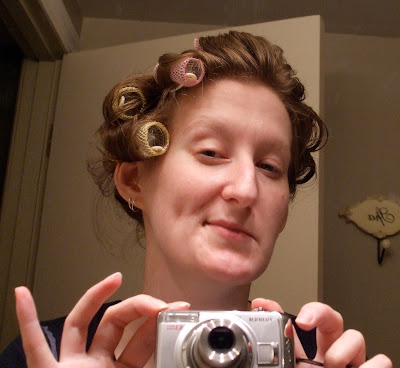 You never put curlers in your hair for the present.  :-)

Thank you for joining me for 100 posts of CitricSugar.  Soon, one hundred and one...
Much love, Carly
Posted by CitricSugar at 10:42 PM