The Bag and The Wallet: A Tragicomedy Love Story

Still haven't finished catching up on my blog reading but this story happened a few months ago.  It's very wordy, because I love to be wordy (and had a blast writing it), so feel free to just skip to the pictures. Hah!

Voiceover from the Trailer:
I used to love my old bag. But time had beaten it up and my needs had changed.  It was heavy and not that suitable for work. I was taking a separate tote, in addition to my purse, and that was taking its toll on my shoulder and sanity.

Act 1: Girl Meets New Bag
But I couldn't find one I liked.  Then I spotted the ByeByeLove Bag.  And needed to make it. It would hold all the things I wanted to hold - shopping bags, wallet, keys, sunglasses, headphones, clipboard, iPad, my pencil case of teacher supplies... yay! 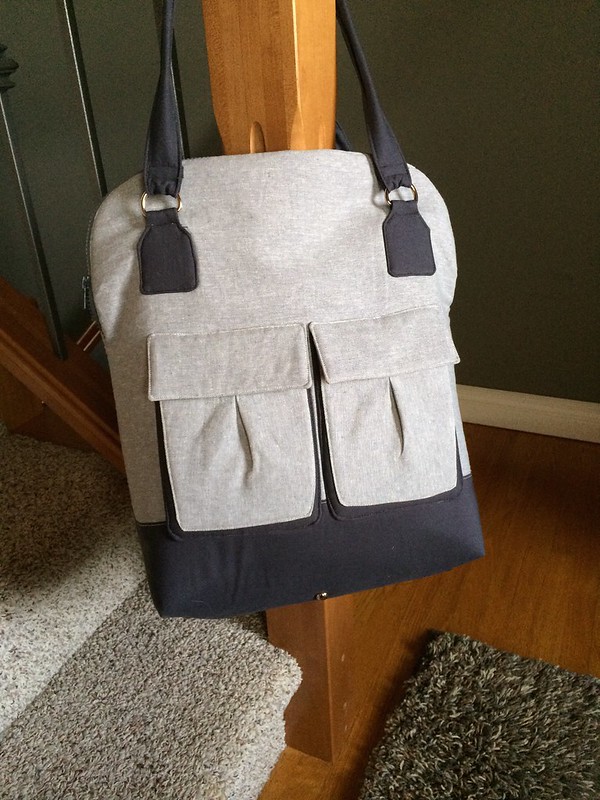 I tinkered with the pattern. 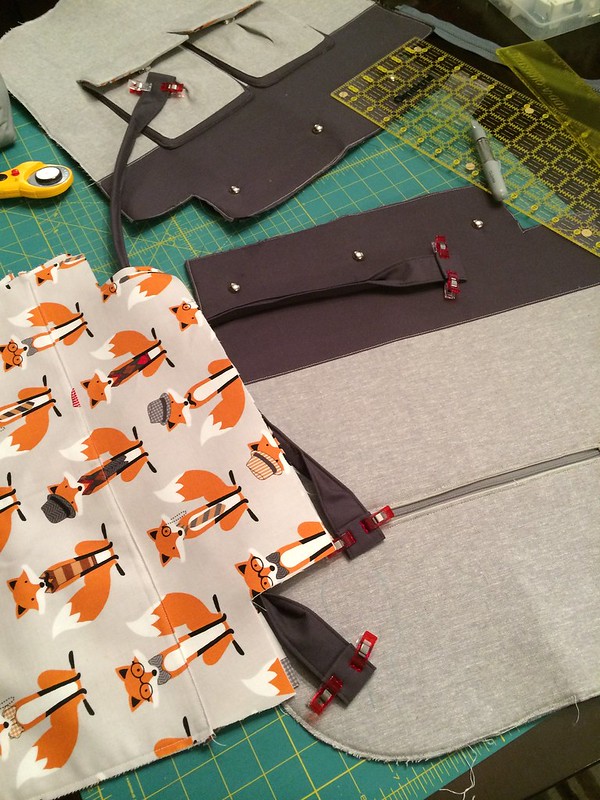 I added a darker bottom and put feet on it, just to give it a little protection from the floor, and I changed up the pocket flaps.  I'm just not a rounded pocket flap kinda girl.  You understand. 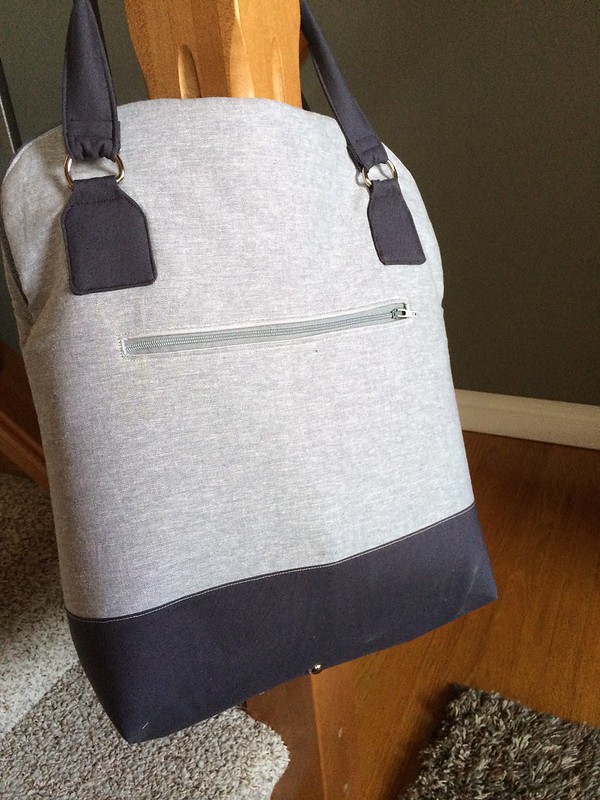 It was a marriage of linen and cotton. I lined it with foxes. 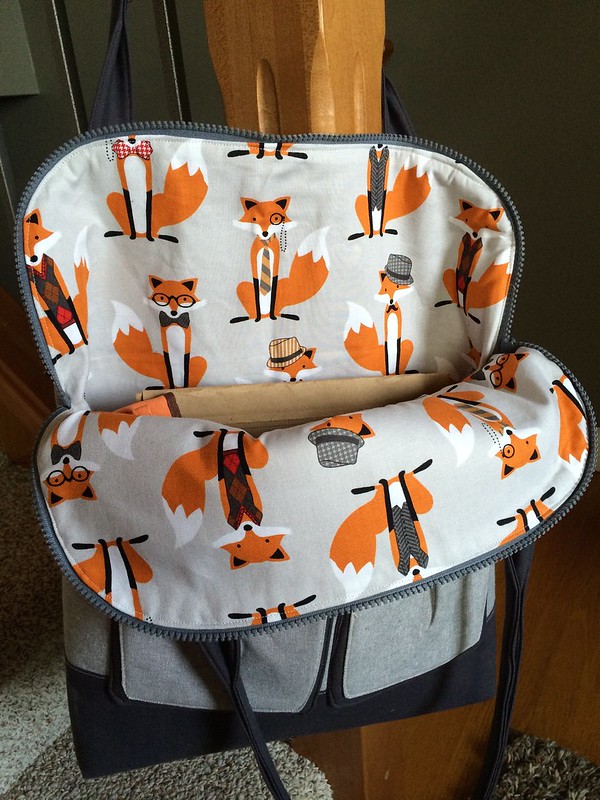 I carried the bag for a couple of weeks.  It was glorious!  It was suitable for work, it looked professional, and it also didn't seem out of place for the rest of my life, either.  I got compliments galore, folks asking where I got it, and they were floored when I proudly said I made it. All was well.

Act 2: The Accident
And then one morning, at work, a flustered staff member knocked her entire cream & sugared coffee all over it.  And in it.

I did the mature thing, or at least I *appeared* to do the mature thing. With students around, I didn't want to give them a poor example of how to handle a first-world problem so with said co-worker being very apologetic and even more flustered, I was calm and proceeded to dab at it with paper-towels, wiped the coffee off the floor, saying all the while, "It's okay, it's just a bag, these things happen...."  Inside I wanted to cry and was trying to figure out whether it could be washed and whether the stains would be set before I even had a chance to TRY to get them out. 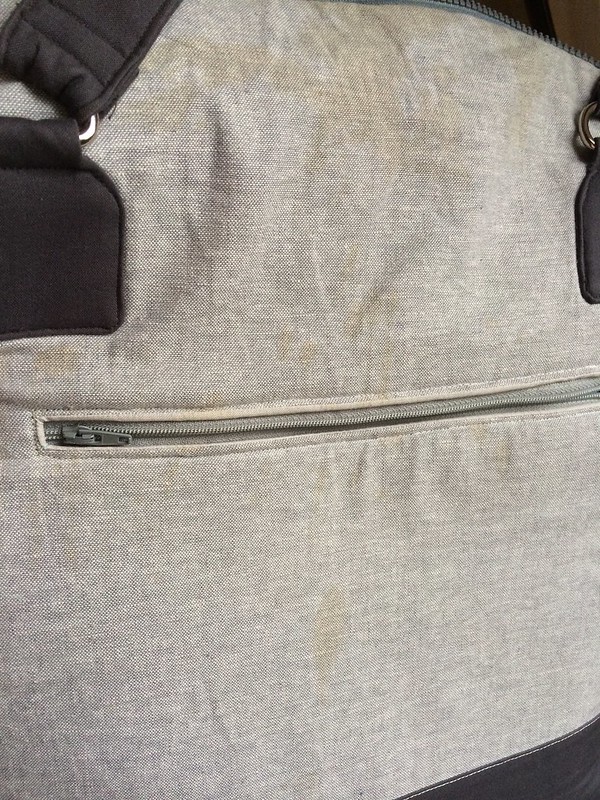 The second I got home I consulted the experts. I decided I could chance washing it. I soaked it liberally with the stain remover, crossed my fingers and held my breath, pushing fears for shrinking and other calamities as far out of my mind as I could.  Oh, the subtle ironies of a pattern's name....  Bye-Bye, Bag I Loved!

Act 3: Insult to Injury
While the bag hung on the drying rack, and I waited to see if the stains had indeed been removed, I also needed to meet a deadline. I needed background and foreground for a quilt I had to finish.  I needed to plunge myself into a project to distract me from the laundry coma my beloved was lolling in...

I went to my safe haven - my Cheers, to drown my sorrows in bolts and fat quarters, carrying the wallet that matched my old bag, the one I'd forsaken, in my hand.  I ran errands, and had quite the handful by the time I'd hit the quilt shop so I'm not sure if I'd dropped the tattered green beast in the parking lot beside my car or if I'd stupidly left it on the front seat and had the door not lock properly when I hit the button.  I don't know. But I didn't have it in my hands when I went to pay.

It wasn't in the store - all the patrons and staff helped me look.

It wasn't in the car or beside the car.  It had only been twenty minutes.

Gone. (Bye Bye Wallet!) I went straight to the bank on the corner to cancel my credit card and get a temporary debit card so that I could at least pay for all the fabric I'd had cut.  I was not incredulous when, after I'd explained my missing wallet situation and tried to cancel my cards, the bank clerk asked if I had ID.  Seriously???  I do have the app on my phone (always in my back pocket, thank heavens!) so I could list off the account numbers and last transactions...

I paid for my fabric at the store with the hand-written temporary card (with that big, white, shameful label that screams to everyone "I was careless with the real one") and trundled off home, heart sinking as I made a mental list of all the ID I would have to replace, and those departments and bureaus I would have to call on Monday, and all because of a stupid cup of coffee, if not for which I'd still have my bag, wallet inside, and not missing/stolen/otherwise AWOL.

I prayed that whoever had it, merely took the money and dropped the ID in the mailbox or turned it in somewhere claiming to have found it.  The money (though I certainly can't afford to just drop money in the street) really didn't matter if I could avoid calling the ministry of health, replacing my social insurance card, my driver's license, vehicle registration....  Someone could be going through my receipts and information and stealing my identity.  Yuck.  I felt violated and icky. AND! What if they cashed in my full loyalty card at the yarn shop - nooooooooooooooo! - and made a break for Belize with my Air Miles?  (Okay, in reality, the miles wouldn't get them farther than Edmonton, but still...)

Late afternoon on the Sunday, the doorbell rang and I ran to find a man holding my ID-laden wallet in his hands.  Before either of us spoke, I nearly burst into tears, thanked him almost a thousand times, and gave him a huge hug.  I had nothing to offer him in terms of a reward, other than my gratitude.  Anything immediately valuable had been stripped, of course, including my hidden small note euros and pounds.  (I live in the hope that a spontaneous scavenger hunt or some other impromptu excursion will take me overseas where that ten pound note would save valuable time or at least avoid calamity...) They even took the pennies. Canada phased them out of currency, but they hadn't yet been phased out of my wallet.  As my conversation with the ID rescuer continued, red flags went up and I began to suspect that he might have been involved in its disappearance as well, but I dismissed the idea as unimportant, in the grand scheme.  Again, I expressed my sincere delight at having my license and certificates and health card and social insurance card and all the other little bits that would have taken ages to list and replace back in my hands with hours of phone calls and running around now off my to-do list.

Act 4: Can't Even Look At It
So now I have the wallet back and, while I'm relieved, it feels tainted. Someone rummaged through the whole thing. It had betrayed all my secrets and didn't even put up a fight. I can't bear to put the new temporary debit card in it, no matter how temporary and laden with the still-stinging sense of recklessness. I surrender to the awkwardness of a sandwich-sized ziploc bag to carry my cards.  The wallet's gotta go.  It's beat up anyway. It was as old as the bag it matched which was now in the bottom of the closet.  It's time for the light bulb idea that our protagonist comes up with - new bag is lonely. 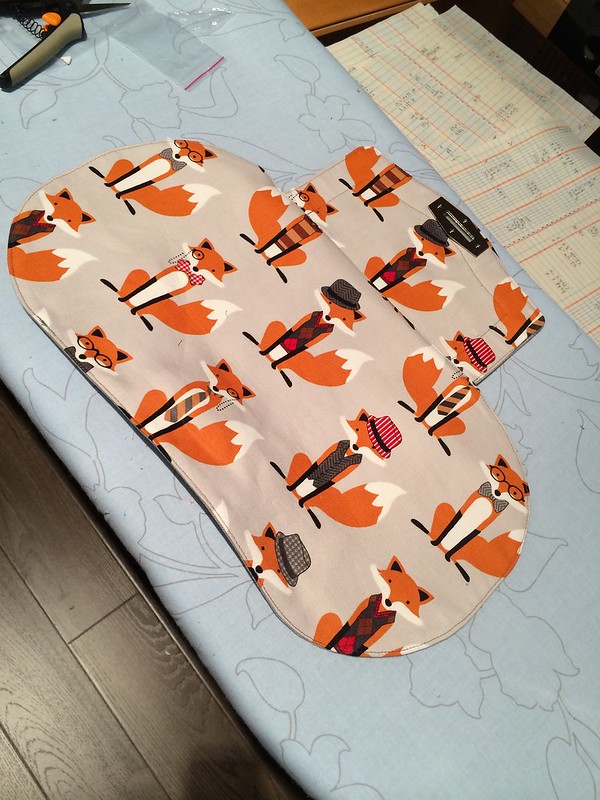 Flash to a furious digging through the notions box for hardware for a long-intended, never started project.  Cut to woman with rotary cutter and flying fabric.  Cue 80s-style sports montage or woman at sewing machine: close-up of foot pedal to the metal, iron pressed up-down-up-down, brow wipe..... 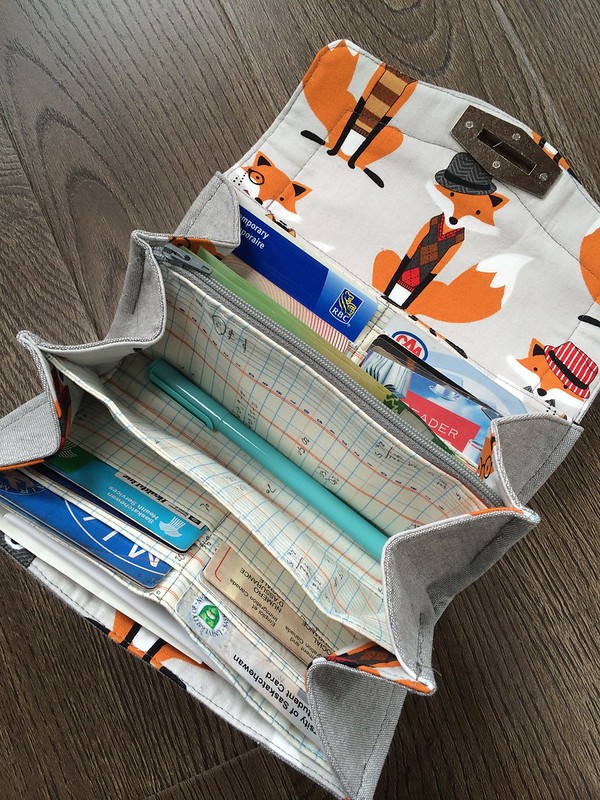 They meet in the hallway, introduced by clunky best friend, Keys O'Lanyard.  "This is Necessary Clutch Wallet."  And you know what, these two?  Cut from the same cloth.  A matching set.  They belong together. 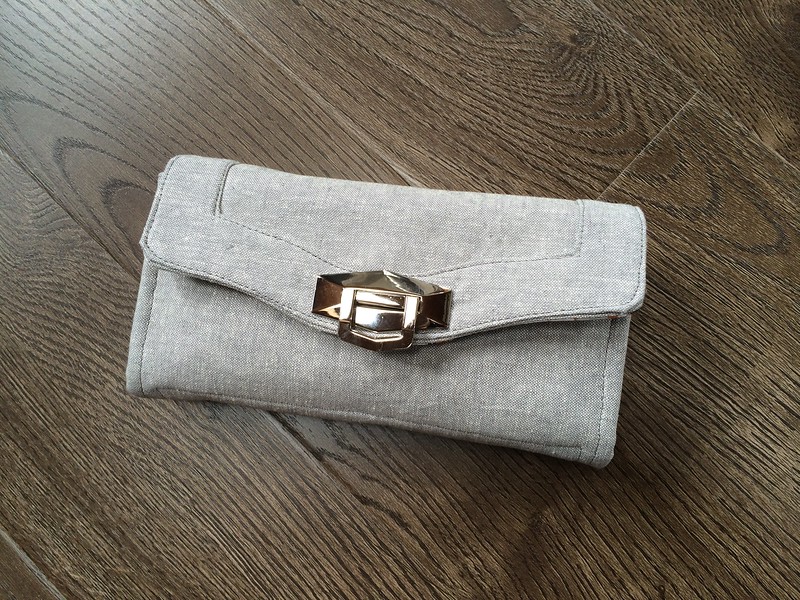 Add in one of those cheesy camera masks that zooms in a heart-shaped focus on the pair before the heart turns pink with the words...

End Credit notes:
In all seriousness - these are great, well-written patterns, though not necessarily for beginners.  Use a denim needle and some WonderClips. Take your time and enjoy it.  And no, this isn't product-placement.  I haven't been asked or paid to put these things in my "movie." :-)
Posted by CitricSugar at 11:44 AM